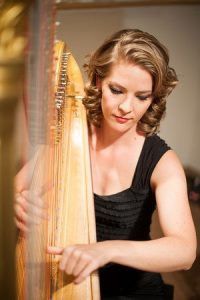 Harpist Ann Marie Liss is lauded for her colorful musical palette and inspirational tone as a solo artist and chamber musician. A Colorado native, she has performed as a soloist and principal harpist with orchestras throughout the United States and Europe including the Breckenridge Music Festival and National Repertory Orchestra and has recorded television and radio productions with Radio France, the Théâtre Français de la Musique, Opéra du Théâtre Impérial de Compiègne and the United States Air Force Academy Band.

The youngest harpist to be awarded the prestigious Diplôme Supérieure de Concertiste (DMA) from the Ecole Normale de Musique de Paris, Liss was inspired by the art of chamber music and pursued simultaneous degrees in conjunction with the Conservatoire National de Région de Paris in cooperation with Conservatoire Municipale Darius Milhaud earning a double Diplôme Supérieure (MM) specializing in both chamber music and harp performance. Continuing in her musical formation, Liss extended her chamber music studies at the Conservatoire National de Région de Rueil-Malmaison and post-doctoral harp performance studies in Lyon, France. She has studied under the direction of Mary Kay Waddington, Dr. Kathy Bundock-Moore, Isabelle Perrin and Germaine Lorenzini.

The laureate of the 2013 Lyon & Healy awards and many national and international competitions, Liss has appeared in concert as a founding member of Duo Esprit, a collaboration with Basil Vendryes, principal violist of the Colorado Symphony Orchestra.

A featured musician on the runways of Paris Fashion Week and the World Harp Congress, Liss has performed on the stages of the famed Sydney Opera House and Paris' Salle Cortot, and her music has received accolades from musicians and dignitaries including Sir Elton John, Billy Joel, Colorado Governors and the Vice President of the United States. As a member of the Colorado College performance faculty and Resident Artist of Denver School of the Arts, Liss also maintains an active private studio and enjoys working with novice to post-grad students of all ages. She is widely sought out as an instructor, coach, and clinician, specializing in technical foundation, tone production, and brain integration in musical performance. Liss is an instructor of harp at the University of Denver's Lamont School of Music.