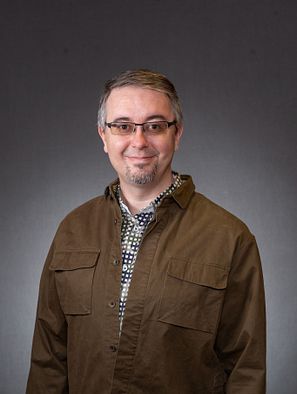 Artist and Professor of Emergent Digital Practices, and Director of the Clinic for Open Source Arts

Chris Coleman was born in West Virginia, USA and he received his MFA from SUNY Buffalo in New York. His work includes sculptures, videos, creative coding and interactive installations. Coleman has had his work in exhibitions and festivals in more than 20 countries including Brazil, Argentina, Singapore, Finland, the U.A.E., Italy, Germany, France, China, the UK, Latvia, and across North America. His open source software project developed with Ali Momeni, called Maxuino has been downloaded more than 75,000 times by users in over 120 countries and is used globally in physical computing classrooms.

My research looks at the intersection of technology and creativity via animation, VR, digital fabrication, creative coding, and electro-mechanics. I explore our collective future and how people relate to one another across borders and identities.