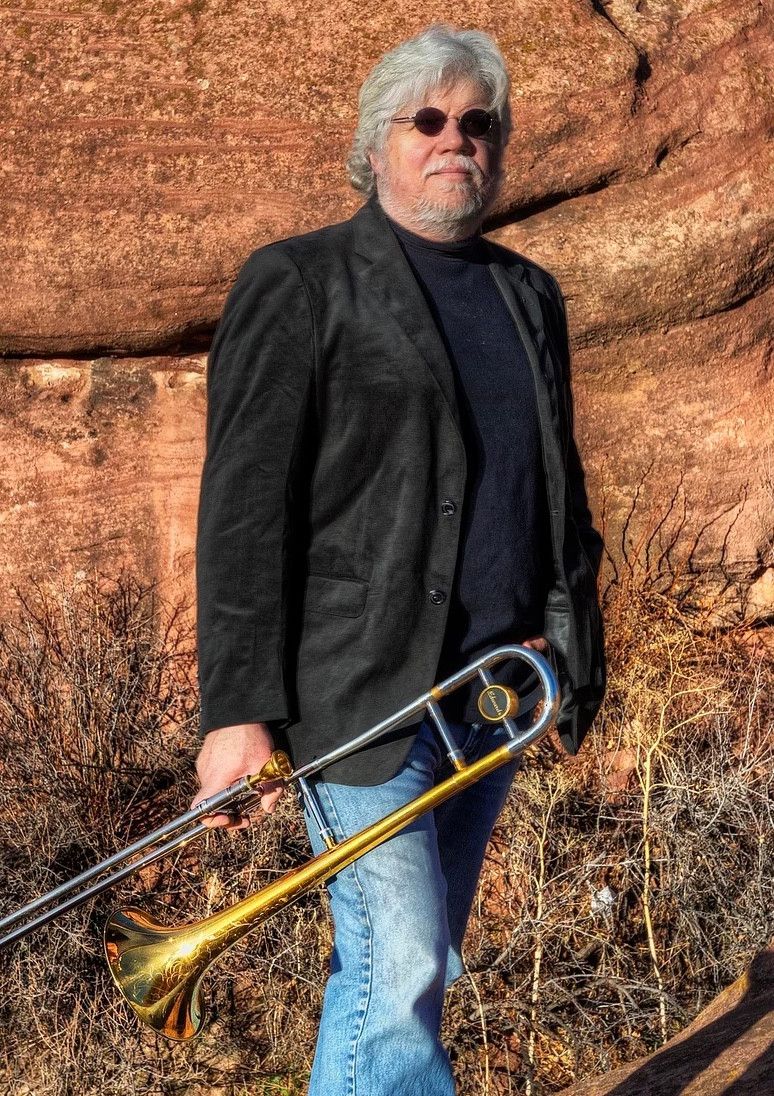 "Steve Wiest is a pioneer. He is fearless. He is a visionary who dares to throw convention to the wind. His music screaming from the very depths of his being, with no rules! This body of work does not seek approval by would-be critics. It emanates, unfettered and joyously, from Steve's heart and soul. Oh, and he has that sly grin!"
–Jimmy Pankow: Hall of Fame Song Writer, Rock and Roll Hall of Fame, Trombonist and Composer-Founding Member of Chicago

Multiple Grammy-nominated jazz composer and trombonist Steve Wiest is known world-wide for his fresh cutting-edge writing as well as his extroverted virtuoso trombone playing. With a zeal for finding fresh ingredients for his muse, Steve is a true multi-genre persona. As a recording artist, composer-arranger, science fiction author, cartoonist, and educator Wiest is at home with many different and diverse areas of creative endeavor.

His path to recognition began with a four-year stint as trombonist and composer with Maynard Ferguson. During this period Steve appeared on two Ferguson projects (Storm and Live from San Francisco) a video project (The Playboy Jazz Festival) and penned a number of works for Maynard including South 21st Shuffle. His YouTube solo on Denis DiBlasio's arrangement of Don't Stop from this era has been described as one of the most exciting of its kind on the Internet.

After leaving the Ferguson band in 1985, Wiest went on to complete a master's in jazz studies at The University of North Texas. During his time at UNT in the 1980s, Steve wrote for and performed on seven different recordings with Neil Slater's One O'Clock Lab Band.

Upon leaving UNT and spending two years as Assistant Director of Jazz Studies at The University of Texas at Arlington, Wiest began a 17-year tenure as Director of Jazz Studies and trombone at the University of Wisconsin-Whitewater. During these years Steve began a long and accomplished career as a clinician-guest artist while becoming a regular with The Doc Severinsen Big Band. Working with greats such as Eugene "Snooky" Young, Conte Candoli and Ernie Watts on Doc's band during this period while continuing to write music for Maynard Ferguson helped to shape Wiest's future endeavors.

In 2006, Steve released his first recording as a leader; Excalibur: The Steve Wiest Big Band to critical acclaim. A unique modern jazz project for large ensemble, Excalibur was described by jazz great Bob Mintzer: "Steve's music is rich with color, textures, and lots of interesting twists and turns. Through utilizing his various influences on this project, Steve has really learned how to 'spin a tale' musically. I very much enjoyed listening to each piece to see where it would go next. He managed to truly develop each idea to the fullest, to the point where it would spill over to the next section out of necessity. As a result of Steve producing this fine body of work, he has emerged as an articulate arranger and composer with a developing distinct voice of his own."

Wiest followed Excalibur up with a 2007 Grammy nomination for his arrangement of Besame Mucho on Maynard Ferguson's final CD The One and Only . 2008 saw the release of another critically acclaimed project titled: Out of the New; The Steve Wiest Quintet which featured nine jazz re-imaginings of modern pop tunes.

Joining the faculty at The University of North Texas in 2007 first as professor of jazz composition, then as director of the six-time Grammy-nominated One O'Clock Lab Band®, Steve has firmly established himself as an important voice in jazz education as well. During his first year as director of The One O'Clock, their recording Lab 2009 was Grammy-nominated for Best Large Jazz Ensemble and Wiest's original Ice-Nine garnered a nomination for Best Instrumental Composition. After producing and directing six successful CDs for the band and touring the US, UK and Thailand with the group, Steve moved to Denver to join the Jazz and Commercial Music Faculty at The University of Denver's Lamont School of Music.

In 2014, Steve wrote his first novel The Dover Stone as a programmatic source for his critically-acclaimed project Concerto for Folded Space which consists of ten pieces featuring Wiest and The Eclectric Band with guest artists Jimmy Pankow, Keith Howland and Jason Scheff of the super group Chicago as well as The Maniacal 4 (plus Jon Gauer) Arlington Jones and Bob Mintzer. The Dover Stone is now available on Amazon.com. After completing his first novel, Wiest discovered that writing fiction was a new artistic endeavor that he really enjoyed. Adding sci-fi author to his polymath tool box, Wiest is now working on his second novel which he hopes will be published soon.

As Co-Chair of Jazz Studies at Lamont, Steve is thrilled to put his love for all things creative into a wonderfully fertile educational environment. Directing the Lamont Jazz Orchestra, as well as working with jazz trombone students and teaching arranging and composition classes, Wiest is enjoying all of the resources and opportunities that Lamont has to offer.

Steve's most recent project is the amazing all-star horn band Vinyl Hampdin. Made up of some of the most important musicians in the world today (with multiple Grammy and CCMA Awards between them) Vinyl Hampdin is a modern rock-pop-funk group with an incredible vocalist. It has been described as "...what Chicago would have sounded like if they began their career in the 21st Century!" Their debut release RED can be found on CD Baby, iTunes, Amazon, Spotify and YouTube.

Continuing a diverse career as a leader, guest artist, composer, cartoonist, author and educator, Steve Wiest makes his home in Taos, NM U.S. while continuing to teach at DU in Denver.