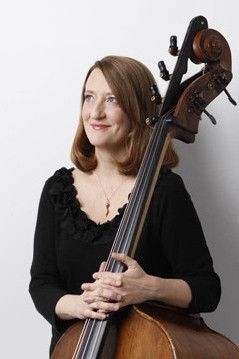 Susan Cahill, Colorado Symphony Orchestra bassist and University of Denver faculty member, graduated from Indiana University. Before joining the Colorado Symphony, where she has held section as well as acting assistant positions, Cahill was principal bass of the Louisiana Philharmonic in New Orleans. She is also a member of the faculty of the Colorado College Summer Music Festival.

As a solo performer Cahill has performed with a number of ensembles. In 2010, she performed as a soloist with the Colorado College Summer Music Festival Orchestra under the direction of Scott Yoo. The Colorado Springs Gazette praised her Bottesini Concerto No.2 as "a showcase for the amazing Susan Cahill, (she) made the double bass sing with a marvelously disembodied, woody timbre." The Colorado Springs Gazette also called her 2008 performance of Jacob Druckman's Valentine "Breathless."

After joining the University of Denver's Lamont School of Music in 2009, Cahill hosted the first ever "Bassfest" at the school with special guest and clinician Bruce Bransby. She presented at the International Society of Double Bassists convention in San Francisco.

Cahill has been active in chamber music and festivals in the West and elsewhere. She has performed with the Colorado Chamber Players, Strings in the Mountains in Steamboat Springs, the Santa Fe Pro Musica and the Peter Britt Festival in Jacksonville, OR. As a member of the faculty of the Colorado College Summer Music Festival, she is known for her teaching and coaching of the double bass chamber repertoire as well as her cutting edge performances of the bass solo and chamber music literature.

In addition to performing with Extasis she enjoys performing and touring with her sister, Beth Cahill, who is a singer-songwriter. Together they have performed at Swallow Hill in Denver as well as various other venues in the West and throughout Canada. With the wildly popular band, Boulder Acoustic Society, Cahill made her recording debut as a cellist on their release entitled 8th Color. Cahill performs on an instrument made by Guiseppe Santori of Turin dated 1823.