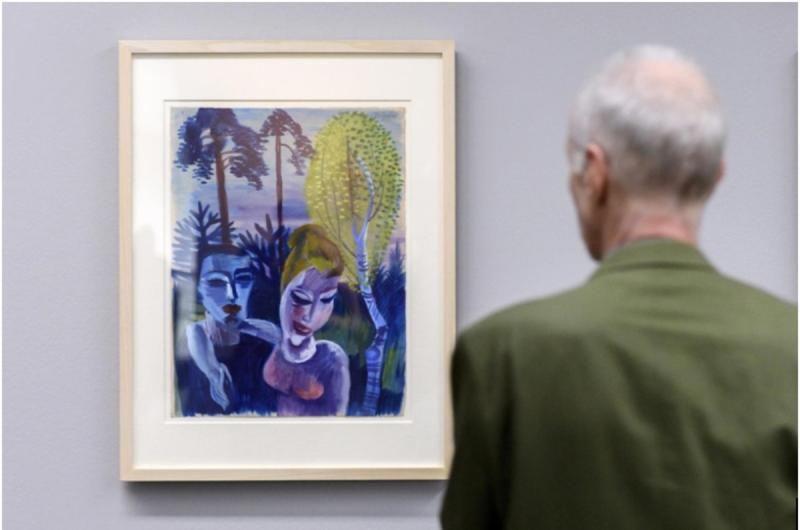 Paar in Landschaaft, 1921 by German painter Conrad Felixmueller. The painting currently hangs at the Bern Museum of Fine Arts. Image retrieved from swissinfo.ch.

Eight years after the discovery of the so-called “Gurlitt Trove,” the provenance investigation funded by the German government has officially ended, leaving more questions than answers.

Of more than 1,500 artworks found in the Munich and Salzburg homes of Cornelius Gurlitt — the late son of Nazi art dealer Hildebrand Gurlitt — only fourteen were positively identified as Nazi-looted art, and thirteen were restituted to rightful owners. Works by Max Liebermann, Henri Matisse, Thomas Couture and Adolph von Menzel are among those returned to despoiled families.

Most of the collection — more than 1,200 pieces — were discovered in 2012 by the Munich public prosecutor’s office, during a search of Gurlitt’s apartment for suspected tax evasion. Authorities seized the items but kept the case secret until the story leaked to the magazine Focus in November 2013, prompting an international media frenzy.

Ever since the story broke with sensational headlines, the German government has faced criticism for mishandling the seizure of the collection and requisite provenance research. A taskforce began this important research in late 2013, only after the media firestorm, but was widely criticized for its slow progress and a lack of transparency.

Meanwhile, Gurlitt passed away in 2014, leaving the collection to the Museum of Fine Arts in Bern, Switzerland. After several months of deliberation, the museum board accepted the bequest, with the exception of any items that may been acquired illicitly by the elder Gurlitt. Those items would be returned to rightful owners, when possible, or held in Germany for additional research.

In 2016, the government-funded German Lost Art Foundation (Deutsches Zentrum Kulturgutverluste) took over the research with a team of international researchers. As reported by DW, Foundation director Gilbert Lupfer announced in May 2020 that after four years of research, the team had exhausted available resources: “We did everything we could.” He admits, however, that there is a “large grey zone” surrounding the origins of around one thousand items, and “many questions remain unanswered.” Reports on each item that may have been plundered by the Nazis are available in an online database, in German and English, with recurring ellipses in the ownership histories.

So, what have we learned? The Gurlitt case provides a cautionary tale about the importance of transparency, and state and institutional investment in provenance research. The German government’s mishandling of the collection from the moment of its discovery has created persistent doubt and mistrust among scholars, journalists, activists and the broader public.

Despite the thirteen successful restitutions, many will continue to wonder whether “everything has been done.” Some online resources, for instance, are available only in German and at the very least should be available in French and English. The fact that the pieces are going to Switzerland, a country with a long history of shielding looted assets, does little to inspire confidence.

The initial “scoop” nature of press coverage, with inflated estimates upwards of $1 billion, also heightened expectations that research would yield far more answers on such a collection of “masterpieces.” While the trove did contain highly valuable pieces by Monet, Renoir and Picasso, there were also numerous lower-value works on paper, including serial graphic works; no official evaluation has been published, but it is likely far below initial estimates. And such pieces often lack associated ownership documentation — sales and insurance records, exhibition histories, entries in dealer stock books and catalogues raisonnés.

The Gurlitt case thus also affords lessons on the nature of provenance research: it is labor-intensive, expensive, and often does lead to dead ends. But transparency is crucial. And research budgets must at least be maintained, if not expanded, amid cuts due to the pandemic. Otherwise, institutions holding artworks in the public trust will never gain the public’s trust.

Read more on this story here and here.