Researching Land Provenance at the University of Denver Mountain Campus 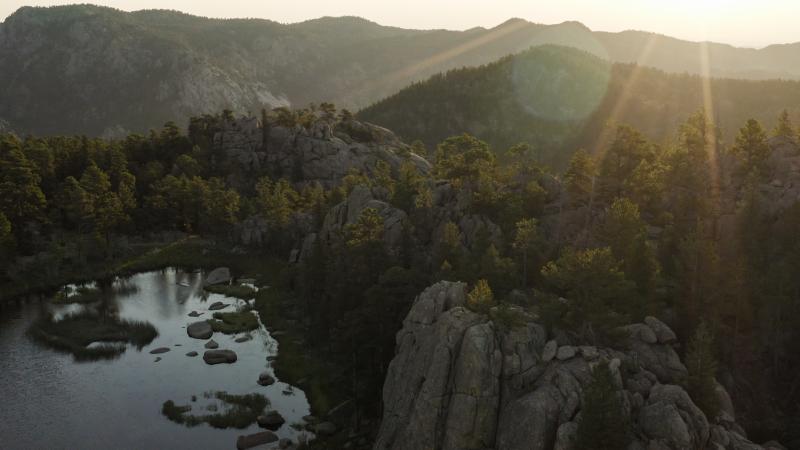 Photograph of the James C. Kennedy Mountain Campus, courtesy of the University of Denver.

In early October 2021, University of Denver Chancellor Jeremy Haefner announced that DU had acquired 724 acres of land alongside the Roosevelt National Forest in Larimer County. The campus carries the name of DU alumnus, donor and former trustee James C. Kennedy, and will allow students to connect with nature in the Rocky Mountains. The University also announced that faculty experts in the Anthropology Department are researching the land provenance of the mountain campus in consultation with Indigenous partners.

This research is what archaeologists call a Class III Archaeological Survey. According to the Colorado Cultural Resource Survey Manual, published by the History Colorado Office of Archaeology and Historic Preservation, a Class III Archaeological Survey “involves 100 percent pedestrian coverage of a project area.” Professor Dean Saitta, who is advising the committee overseeing this project, explained to ACE Graduate Assistant Callie Cherry that this means researchers will systematically walk over the entire 724 acres of land acquired by the University. According to Professor Saitta, researchers will be looking for artifacts on the ground, but also for signs of cultural use of the surrounding forest, surface evidence of structures like pithouses, and rock art that might exist over cliff hangs. This data will be used to reconstruct how peoples occupied and used the Mountain Campus area over the last 10,000 years.

According to Professor Saitta, researchers also will be examining arroyos and creek beds for evidence of any eroding human burials. A 9,000-year-old burial site was found near the Mountain Campus in the 1960s (see Breternitz, Swedlund, and Anderson, “An Early Burial from Gordon Creek, Colorado,” 1971), but Saitta stated it would be “surprising” to discover human remains today. If a burial site is found, however, steps will be taken to repatriate remains to the appropriate community according to the Native American Graves Protection and Repatriation Act (NAGPRA).

Regardless of whether artifacts or remains are found on the Mountain Campus’ property, the University will be collaborating with local tribal communities throughout the land provenance project. According to the University of Denver’s Indigenous Initiatives, the University is committed to “developing meaningful and reciprocal relationships with Denver and Colorado Native American and Indigenous communities.” The University’s NAGPRA Coordinator, Anne Amati, told ACE that at least 15 Indigenous groups have lived or traveled near the Mountain Campus site, and every community will be contacted. The goal of this partnership is to invite tribal communities to assist with the survey and, if they are willing and able to do so, potentially provide valuable cultural knowledge that could enhance the research.

While this provenance research is part of the University’s commitment to honoring Indigenous heritage, it will also impact faculty scholarship, and possibly even operations at the James C. Kennedy Mountain Campus. Anthropology faculty members are interested in learning more about how mountain environments have historically been used in hunting and gathering lifeways, including ritual use. Some Indigenous partners, Saitta added, may have their own research questions about their ancestors’ activities in the mountains that can help shape scholarly investigation. He said that there's interest in dedicating space on the Mountain Campus to contemporary Native American ritual activity.

As development begins at the Mountain Campus, including improving utilities access and installing fiber optic internet service, Professor Saitta and his colleagues in the Anthropology Department will also be monitoring that activity to ensure that any cultural resources are not disturbed in the process. According to the University, students could begin visiting the James C. Kennedy Mountain Campus as early as Fall 2022.

Photograph of the James C. Kennedy Mountain Campus, courtesy of the University of Denver.