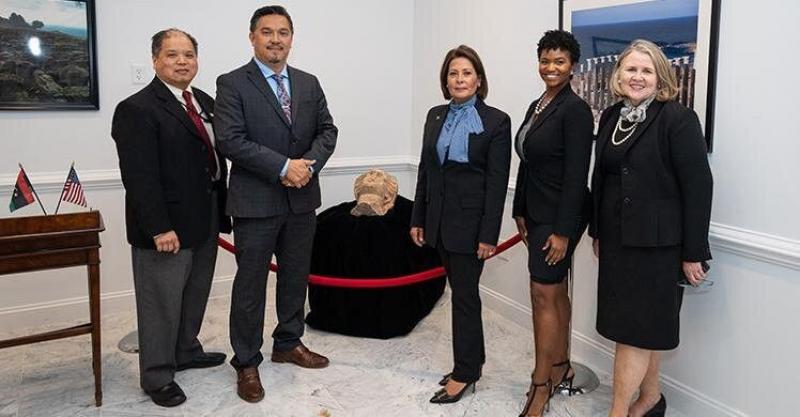 “Head of a Veiled Woman” during a repatriation ceremony at the Libyan Embassy in Washington, DC. Image: ice.gov

On October 3, 2019, the United States repatriated to Libya a sixth-century statue, “Head of a Veiled Woman,” believed to have been stolen from the ancient city of Cyrene. The repatriation ceremony, held at the Libyan embassy in Washington, followed an 11-year investigation involving several U.S. government entities, including Immigration and Customs Enforcement (ICE), the State Department, and Customs and Border Protection.

In 2008, ICE Homeland Security Investigations (HSI) received information about looted antiquities originating from an antiquities dealer in Dubai and concluded that some 50 items had been shipped illegally to museums and galleries in New York City.

In response to the high rate of illicit trafficking of antiquities, Libya and the United States negotiated a Memorandum of Understanding in 2018. Such agreements underscore the need for international collaboration in preventing these crimes and ensuring the repatriation of illicitly traded artifacts. The ceremony was the first since the U.S.-Libya agreement.

For its part, HSI's International Operations unit continues to partner with foreign governments across the globe to investigate the role of criminal organizations in highly lucrative antiquities trafficking operations.