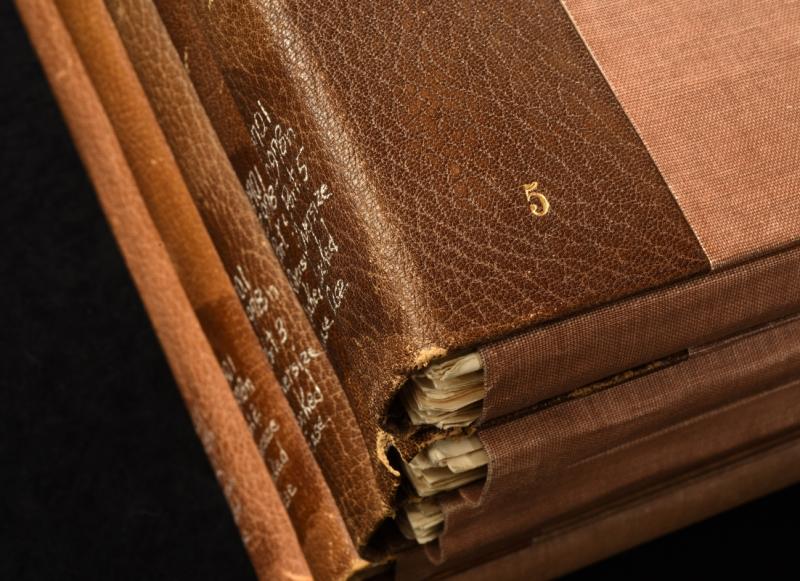 (Image courtesy of the University of Denver Special Collections)

This third post in our Provenance Point of View (POV) series further explores the experience of DU graduate students performing provenance research. While previous posts focused on work in the School of Art & Art History, this month’s Provenance POV will discuss the work of David Fasman, a recent graduate of the Morgridge College of Education’s Master of Library & Information Science (MLIS) program. David’s capstone research, to be published in peer-reviewed academic journal later this year, investigated a peculiar gift to the University of Denver: a book collection offered by the Prussian State Library under the Third Reich, via the local German consulate. Through a planned cultural exchange between the University of Denver and the Prussian State Library from 1936 to 1939, the gifts to DU include over 500 books. University Libraries continues to hold the books today.

As a graduate student in the MLIS program, David learned about the donation of books through coursework on database research. The books donated by the Third Reich, all in German, contain materials on German art and culture as well as explicitly eugenicist and antisemitic materials. Each item has an identifying marker: an owl stamp near the inside of the front cover. Using materials in University Libraries Special Collections, David began to research how these books came to the University of Denver. He discovered that the stamps belonged to the exchange wing of the Prussian State Library, and demonstrated a relationship between DU and the Third Reich. He also uncovered correspondence indicating that University officials intended to offer materials in return, though he found no evidence that books were sent from DU to Germany.

The book shipments from Nazi Germany began in 1936, in a program openly publicized at the time. In celebration of this initial shipment, the University hosted a “German night” at which the German Consul presented a gift of books to then-Chancellor Dr. D. Shaw Duncan. The event was not entirely new; the University regularly hosted such “international nights” to promote cultural exchanges. Yet this "German night” in 1936 received significant press attention, including from the Associated Press, the Jewish Exponent, and the Seattle Times, as well as local and student papers. The Denver Jewish community swiftly denounced the University’s acceptance of the gift. Simon Heller, the B’nai Brith Anti-Defamation League chairman, told the Intermountain Jewish News that the gift acceptance “places the University under an obligation” to the Nazi regime. David found that the gift did indeed create “a relationship of exchange” with the Third Reich.

To be clear, the program was not exclusive to the University of Denver. Universities and scholarly societies across the world participated in exchanges with the Third Reich. The shipments to DU continued into 1939, mere months before the German invasion of Poland launched World War II in Europe.

David’s research raises many questions about the ethics of the acquisitions and appropriate management of the collection today. At a time when antisemitism is on the rise again, there is reasonable concern about whether controversial and potentially harmful materials from the acquisition should be accessible to students and the broader public. David believes that this collection should be accessible, and he is planning an exhibit to highlight how the University of Denver community can “dismantle the hate of the present through the preservation of historic hate.”

Another concern regarding this collection is the provenance of these books prior to the Third Reich. David found that the Prussian State Library absorbed many books that had been confiscated from Jewish owners and communities. Restitution to rightful owners may be possible thanks to the Nazis’ meticulous record-keeping, but such research is a slow and painstaking process.

Katherine Crowe, curator of Special Collections and Archives, believes it is “incumbent upon archives to collect and make collections accessible (or not) responsibly, and, in some cases, return or repatriate them if they were acquired through illegitimate methods and their legitimate owners can be identified.” Plundered art, archives, and rare books share provenance issues and dilemmas related to the chain of custody, Crowe explains, “but scholar-practitioners in these fields haven’t always shared knowledge about best practices. This collection is a great example of why it’s important for us to make these efforts.”

According to Michael Levine-Clark, dean of the University Libraries, the proper management of these items may end up leading to restitution. “These materials,” he argues, “both in terms of how they were acquired and their content, shine an important light on how institutions, without strong ethical guidelines in place, can acquire materials that they shouldn’t.” Levine-Clark continues: “I fully support the restitution of any of these materials to individuals and families if we can determine that they were indeed stolen and from whom.” He also believes that “any remaining collection materials and documentation from this set of acquisitions can and should be collocated and used as a teachable moment both for the University, and for the library, in terms of not just how we acquire rare books and archives going forward, but how we do business in general.”

The Center for Art Collection Ethics at DU promotes object-based research in all University divisions, and is investigating ways to involve more students in this research, in cooperation with University Libraries. The collection of materials donated by the Third Reich provides an opportunity to broaden discussions about the ethical stewardship and circulation of these materials, far beyond the University of Denver. According to ACE Director Elizabeth Campbell, the Center hopes to “facilitate this research and host a public symposium on the findings.”