The DU Museum of Anthropology hosts seasonal and rotating exhibits curated by faculty, students, and members of the anthropological and artistic communities. From contemporary Native American art to collections reflecting on the internment of Japanese-American citizens during World War II, DUMA is proud to host exhibitions that advance the conversation around anthropological study and bring together the disparate voices of our cultural communities. 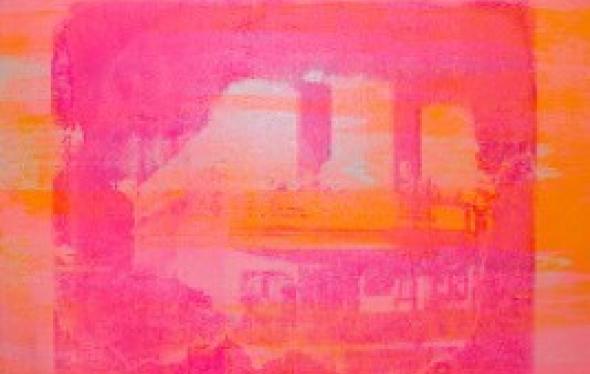 Para-Place: An Exploration of the Spaces Betwixt and Between

This exhibit is a collaboration between contemporary artist JD Sell and students from Abraham Lincoln High School.The exhibit serves as a creative platform for important conversations concerning the accelerating social, economic, and demographic changes taking place in the city of Denver. Para-Place will feature Polaroid photography and screen-printed infused paintings that explore the in-between spaces of our urban environment, from the unique perspective of Denver teens. 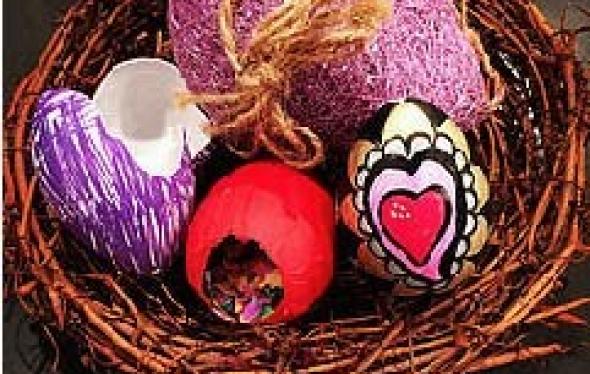 The He(artery) of Pregnancy and Baby Loss

The He(ARTery) of Pregnancy and Baby Loss showcases the artwork of The Scraps of the Heart Project collaborators, including bereaved parents, healthcare providers, artists, students, and researchers. The exhibit welcomes all to bear wit(h)ness to its art and stories--vessels that contribute to a circulatory system of community and breathe life into babies and their families. 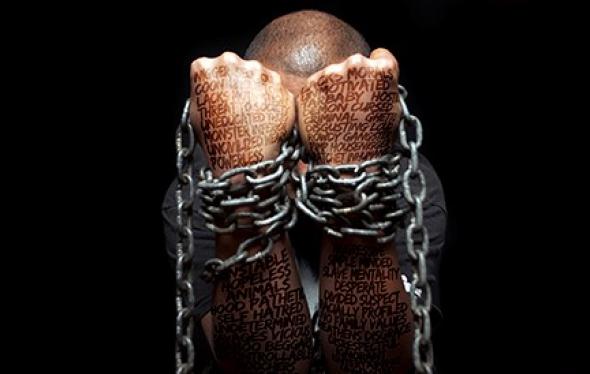 The Chain of Perception in Black America 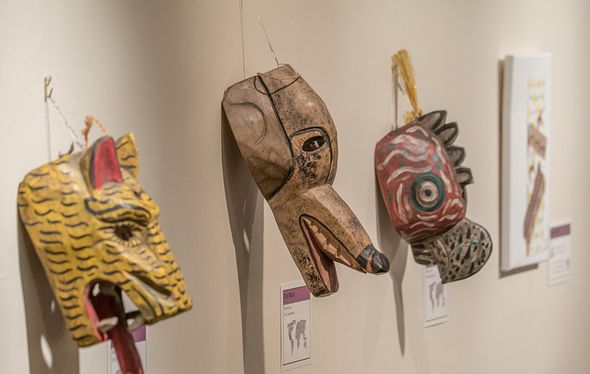 This exhibit, coordinated by graduate student Lindsey Miller, brings together artwork created by individuals with Alzheimer's and their care partners with the masks from our collection that inspired them. Draw your own mask or share your responses to the exhibit on a chalkboard wall inside the gallery.

This exhibit was created in partnership with the Colorado chapter of the Alzheimer's Association and the Denver Art Museum's Art and About program. 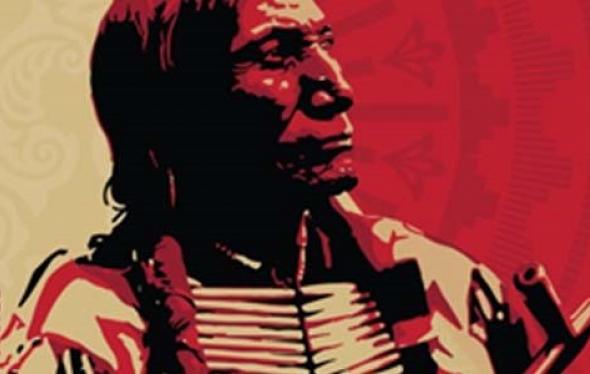 "Our existence is a protest to the very policies that have tried to shape us and eliminate us. We are still here, you still walk on Indian land, and we are not your Indian." – Gregg Deal

Misconceptions about Indigenous people in North America are still perpetuated in popular media and fine art. In this exhibit, activist artist Gregg Deal confronts those stereotypes as the Featured Artist of the 14th Annual Indigenous Film and Arts Festival.

Hunger through My Lens: Photographs of Hunger in Everyday Life

Did you know that nearly 1 in 7 Coloradans struggle with hunger, facing times when there is not enough money to buy food. Hunger Through My Lens features photography by local individuals who experience hunger—putting real stories to the overwhelming statistics surrounding hunger. The photographs provide tangible evidence that there's a need to face the impacts of hunger on individuals, families, and communities throughout Colorado. 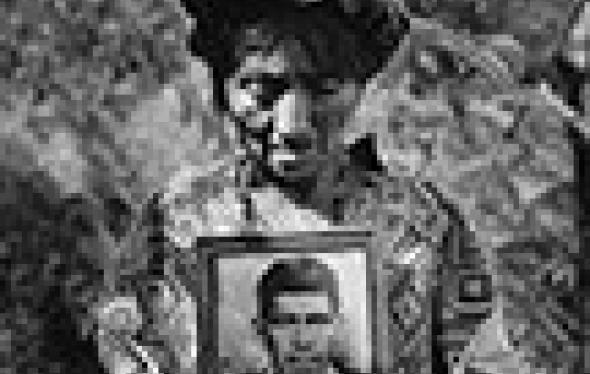 Our Culture Is Our Resistance: Repression, Refuge and Healing in Guatemala

Fine art/documentary photographer and human rights activist Jonathan Moller's photographs tell the story of the tragic history of Guatemala: the repression and genocide carried out by state security forces in the early 1980's, and the work for justice, truth, and reconciliation being done within a continued context of impunity and human rights violations in the late 1990's and the 2000's. 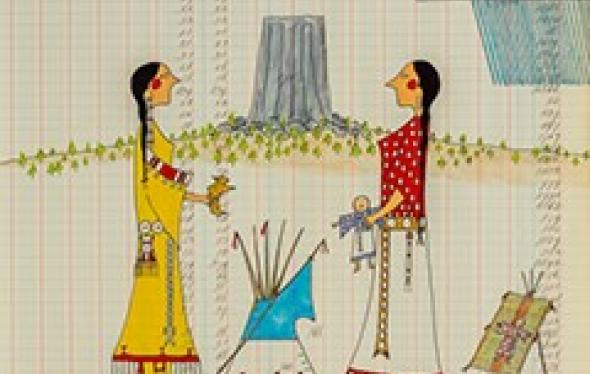 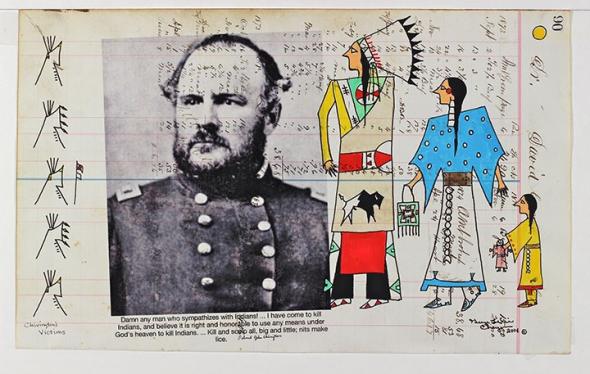 One November Morning: Art on Sand Creek by Cheyenne and Arapaho Artists

Read an interview with Brent Learned in the University of Denver Magazine. 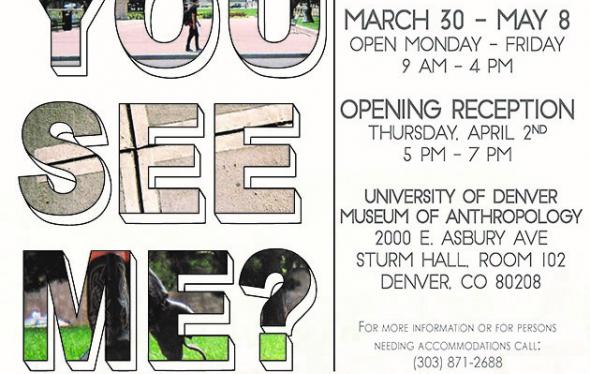 Can You See Me?

Curated by University of Denver graduate student Taylor Morrison, Can You See Me? featured photography by three homeless women living in Denver.

Connecting the Pieces: Dialogues on the Amache Archaeology Collection 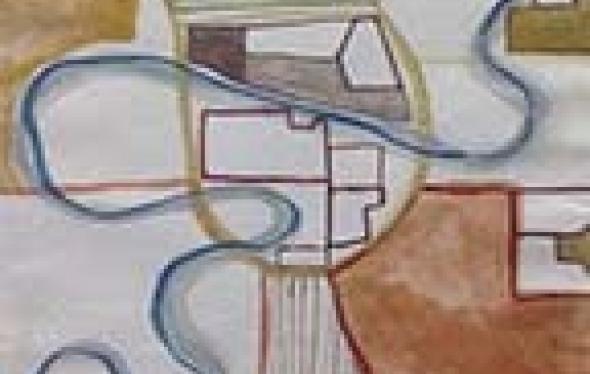 As a printmaker, painter, and sculptor, Melanie Yazzie's work draws upon her rich Diné (Navajo) cultural heritage. Through her art, Melanie works to serve as an agent of change by encouraging others to learn about social, cultural, and political phenomena that shape the contemporary lives of Native peoples in the United States and beyond. Ms. Yazzie's art incorporates both personal experiences as well as the events and symbols from Diné culture, and strives to tell many stories about things both real and imagined. 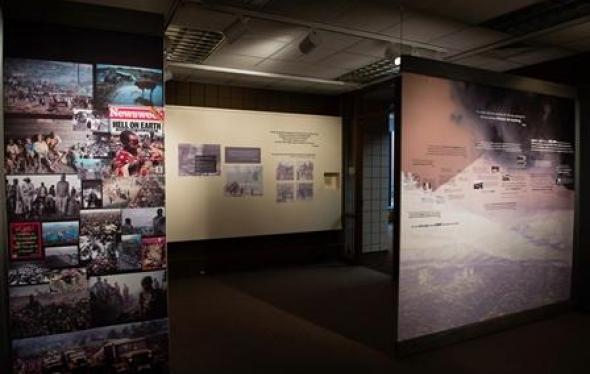 Living with the Memory: Rwanda Twenty Years On

Part of the Rwanda 20 Years Ago campus-wide project remembering the 1994 Rwandan genocide that took the lives of over 800,000 people. Professor Ermitte St. Jacques and anthropology graduate students interviewed three survivors of the genocide. The survivors' stories and voices were highlighted in the exhibit. 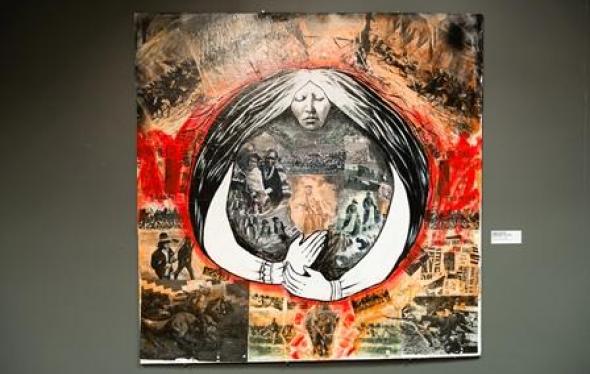 An exhibit curated in partnership with the University of Denver Native Student Alliance and the DU Department of Anthropology. Thomas Greyeyes and Ryan Singer's artwork addressed the history of the Sand Creek Massacre from Native American perspectives, and presented ways their communities are healing and moving forward.

An exhibit of bicycles and cycling, created by Christina Kreps' Capstone Seminar in Anthropology.

A student-curated exhibit commemorating the 100th anniversary of the Ludlow massacre. On April 20, 1914 several people were killed, including striking coal miners, two women and 11 children. The exhibit focused on the memorial that stands at the Ludlow site and how it has been used in the past and present to remember those who fought and still fight for worker's rights. 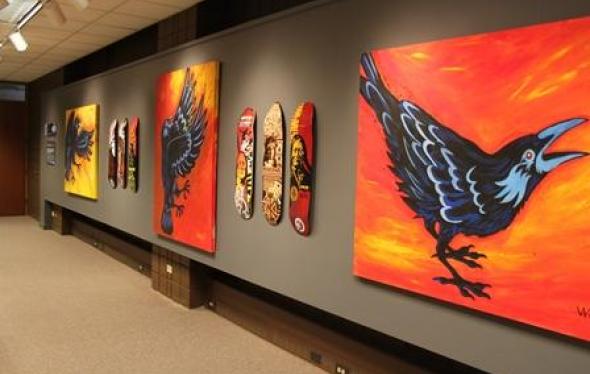 Raven Cry: Message from the Stronghold

Walt Pourier is Oglala Lakota from the Pine Ridge Reservation in South Dakota. He currently lives in the Denver, Colorado area where he is Creative Director of Nakota Designs and Executive Director of the Stronghold Society a nonprofit dedicated to instilling hope and supporting youth movements through Live Life Call To Action Campaigns. 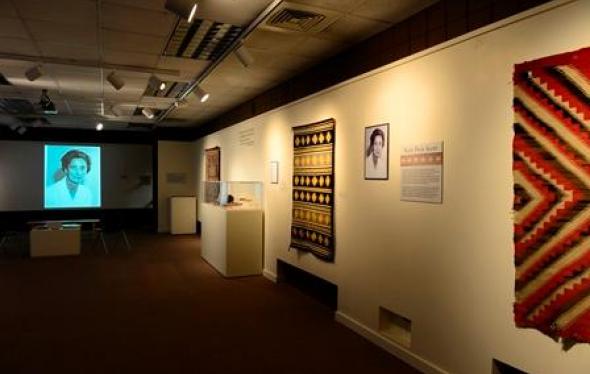 An exhibit inspired by Keri Smith's book How to be an Explorer of the World. Christina Kreps' Museum Anthropology class created miniature exhibits using Keri Smith's Exploration activities as inspiration.

An exhibition featuring new acquisitions to DUMA. The exhibit was a cornerstone for Christina Kreps' Art and Anthropology course. Students learned to conduct research on objects and their many meanings.

A collaboration with the University of Denver Native Student Alliance. The exhibit featured the art work of Douglas Miles, who created portraits of DU students and faculty during an artist residency at DU.

Speaking with Cloth: Capulanas of Mozambique

Curated by Dores Cruz, Speaking with Cloth featured modern capulanas as well as those from DUMA's collection.