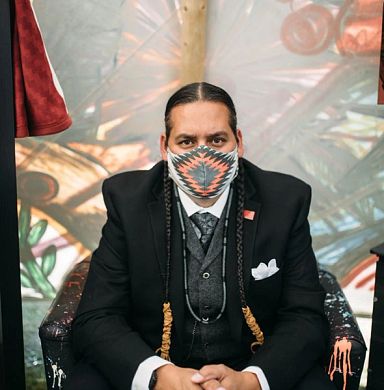 “Places of Memory” seems simple enough, but grinding toward the nuance of culture, history, tradition, trauma, language, belief and identity can complicate it. Places of memory are often associated with good memories, but I believe they include hard things too. The good things help move you along with hope, but the hard things make up a lot of who you are.

Truth must exist in these spaces for them to be useful. As an artist, bringing these truths to the forefront can help tell stories not often told and bring information to places where that information doesn’t exist. In sharing these ideas, consistency—in the memory, in its importance, in its truth,  and its existence—becomes paramount. The existence of Indigenous people is predicated on memory. Sharing these things down through the generations becomes part of the cultural identity.

For More of Gregg Deal's Art

To inquire about any of the artwork featured here, please contact Gregg Deal

*Note* If you are having trouble seeing the images below, please reduce the width of your browser window

My work, overall visits faces, ideas, historical considerations, irony, issues and statements of collective struggles. It is confrontational, familiar, challenging and even subversive. There is a trajectory to the work, the evolution of an artist that is navigating American culture, personal identity and the ideas that exist both in my own head, and in popular culture and understanding. The combination of old ideas, new ideas, and the complexities of these concepts, is what you see here.

So much of my work has been related to figure. Faces articulate so much of time, space, emotion, and presence. I am grateful for the faces of the past that inform the present. They have become paramount to my work. It seems like such a simple thing, but much of the representation that has informed Indigenous identity from the past has been through the eyes of the colonizer. That perspective informs the expectation of Indigenous existence.

Our knowledge of the past, and the ways our identity has been controlled for hundreds of years are now being challenged in so many important ways. Without these challenges, there is no progression to the future. Challenging may seem like a strong word, but even a small shift in the context of an image can make big waves. For years, Indigenous people were not represented in images of the past as well as the present. Existing for the sake of existing in any space of our own choosing challenges these ideas. I’m grateful to do that.

This combination of the Indigenous image and the lightening bolt over the face from David Bowie’s Ziggy Stardust has been in my work since about 2010 when it was subversively showing up in my work. This is wholeheartedly about challenging the singular perception of Indigenous identity, the idea that Indigenous identity can intersect with other subcultures like music. Over time, this has become an important and even iconic piece in my work. It is subtly challenging while simultaneously making people happy in understanding the intersection of ideas and identities.

"The Others" is a new series that reappropriates old comic book images from the 40's and 50's with Indigenous characters. In it, the dialogue is replaced with lyrics from old Punk songs of the 70's, 80's and 90's that resonate with the scene, or the greater Indigenous struggle. Each image has been redrawn, recolored and repurposed to embody aspects of stereotype, identity, historical consideration and the intersection of an aspect of American culture (Punk Rock) that has affected my life and has affected innumerable Indigenous youth through the years. These intersections are meant to illustrate the complexity of Indigenous existence, growing up in America amidst things we love and things we hate. While easily viewable as a series of works and speaks to people regardless of connection it has to specific music and bands, it stands on its own illustrating these Indigenous complexities

My mural work uses much of my graphical work along, and in the case of “The Others”, uses paintings I’ve been working on. As much as my work disrupts narratives, spaces or perceptions, Murals do it even mores. Existing in public, aligned with principles of street art, the accessibility of this work is greater and ultimately falling in line with the democratic process of providing information, speaking freely and disrupting spaces where these concepts might not be as readily available.

Gregg Deal is a husband, father, member of the Pyramid Lake Paiute Tribe, artist and activist. As a provocative contemporary artist-activist, much of Deal’s work centers around Indigenous identity and pop culture, touching on issues of race relations, historical consideration and stereotype. With this work—including paintings, mural work, and performance art—Deal critically examines issues within Indian country such as decolonization, stereotype and appropriation.

Deal grew up in Utah and was primarily self taught in art. Having gravitated towards graffiti, Deal spent a significant amount of time honing his craft as a graffiti artist through the 90’s. Upon meeting his wife, Deal went to college in the Washington, DC area and focused his craft in fine art. When Deal completed his studies, he worked for the National Museum of American Indians during its inaugural year, won a mentorship with indigenous performance artist James Luna, and struck out on his own to pursue the arts full time. Amidst this time, Deal worked as an advocate for change of the Washington Football Team name and finished his first major performance piece, “The Last American Indian On Earth”, gaining notoriety and ground as an up-and-coming artist.

After living in the Washington DC area for 17 years, Deal moved his family to Colorado, coinciding with his Native Artist In Residence at the Denver Art Museum. Deal continues to work on various issues while pushing his craft in both painting, mural and performative work; speaking in various places around the country; participating in shows; advocating for various issues affecting Indigenous people; and constantly pushing for critical thought and historical consideration for contemporary Indigenous art.

Most recently, a photograph of Deal was included in the 12.2018 National Geographic Society Magazine article “Native Americans are recasting views of indigenous life”, has been Native Arts Artist-in-Residence at the Denver Art Museum in 2015-2016, and 2017 and Artist In Residence at UC Berkeley for the 2017-2018 school year. His art has been exhibited nationally since 2002. Deal has lectured widely at prominent educational institutions and museums, including: Denver Art Museum, Denver, C.O.; Dartmouth College, Hanover, N.H.; Columbia University, New York City, N.Y.; Smithsonian’s National Museum of the American Indian, Washington, D.C. His television appearances have included PBS’s The Art District, “The Daily Show”.