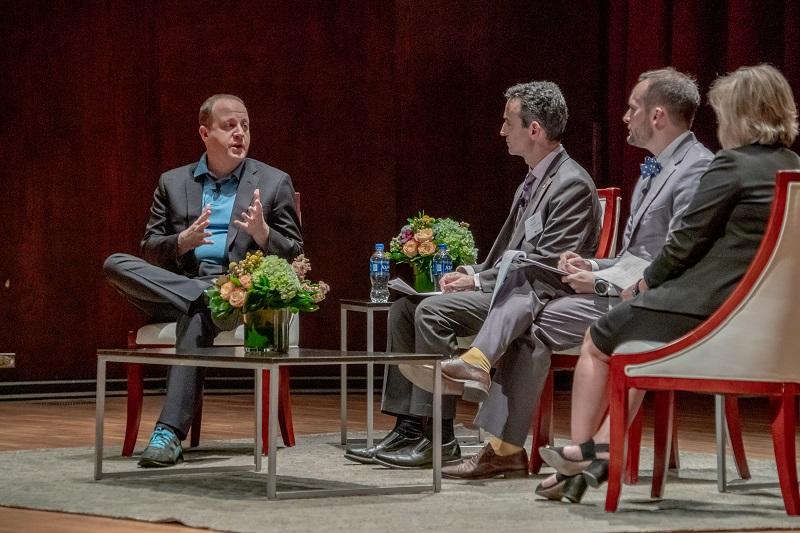 A packed Davis Auditorium greeted Gov. Jared Polis and Colorado’s leading lawmakers when they came to the University of Denver for a May 13 roundtable debriefing of the state’s most recent legislative session — Polis’ first as chief executive.

DU’s Center on American Politics (CAP), directed by political science professor Seth Masket, hosted the event as part of its emphasis on bringing important civic events to campus and promoting discourse among faculty, staff, students and the community at large. More than 600 people RSVPed.

“[This event] says that this community is interested in engaging with the government in Colorado,” Chancellor Rebecca Chopp said in her opening remarks. “[CAP] also helps our entire community, most especially our students, gain access to politics, leaders in government, and programming and events.”

The debriefing marked Polis’ first campus appearance since October, when he debated general election opponent Walker Stapleton. He previously took the stage at Sturm Hall in June 2018 as part of the CAP-hosted gubernatorial primary debates.

For the first half hour, Polis answered audience-submitted questions, passed along by moderators Shaun Boyd and John Frank, representing the event’s co-sponsors, CBS4 and the Colorado Sun. Many submissions keyed on Polis’ position on immigration, about which the governor said he favored rules crafted on a local level. He applauded efforts to increase financial aid to undocumented out-of-state college students and a program to provide driver’s licenses to those who are part of the Deferred Action for Childhood Arrivals (DACA) program.

One DU student asked Polis, the nation’s first openly gay governor, what advice he would give “an aspiring queer politician,” to which the governor responded: “Pursue your passions. To be in politics, it’s good to have a background in some other area in society. There’s no one background that’s ideal for a career in public service.”

As the moderators reviewed Polis’ successes related to free, full-day kindergarten and oil and gas regulation, as well as his struggles over a tax on vaping devices and a bill designed to increase vaccination rates, they also asked him to look ahead to the next legislative session, which begins in January.

“I’m not going to be here fighting or arguing for totally different things next session,” Polis said, referencing expanded pre-K and more affordable health care. “We plan on continuing the work I campaigned on [and] talked about in my first State of the State [address]. It will be a continuation of achieving those goals that will free up peoples’ income, save people money so they’re able to enjoy the Colorado that they love in the face of higher living costs.”

The second half of the program featured the minority and majority leaders from both of Colorado’s legislative chambers. House Speaker KC Becker (D-Boulder), Rep. Patrick Neville (R-Castle Rock), Senate Majority Leader Steve Fenberg (D-Boulder) and Sen. Chris Holbert (R-Highlands Ranch) conducted a lively discussion about how to respond to a recent school shooting in Highlands Ranch. The Democrats on the panel advocated for mental health support for youth, while Republicans lobbied for arming teachers and improving training for school resource officers.

“An event that lets the public hear directly from their leaders — whether Gov. Jared Polis or lawmakers — fits within our mission to serve readers,” Frank said. “One of our goals at The Colorado Sun is to demystify politics and explain how it works. That's why we helped organize the event and thought it was such a great success.”