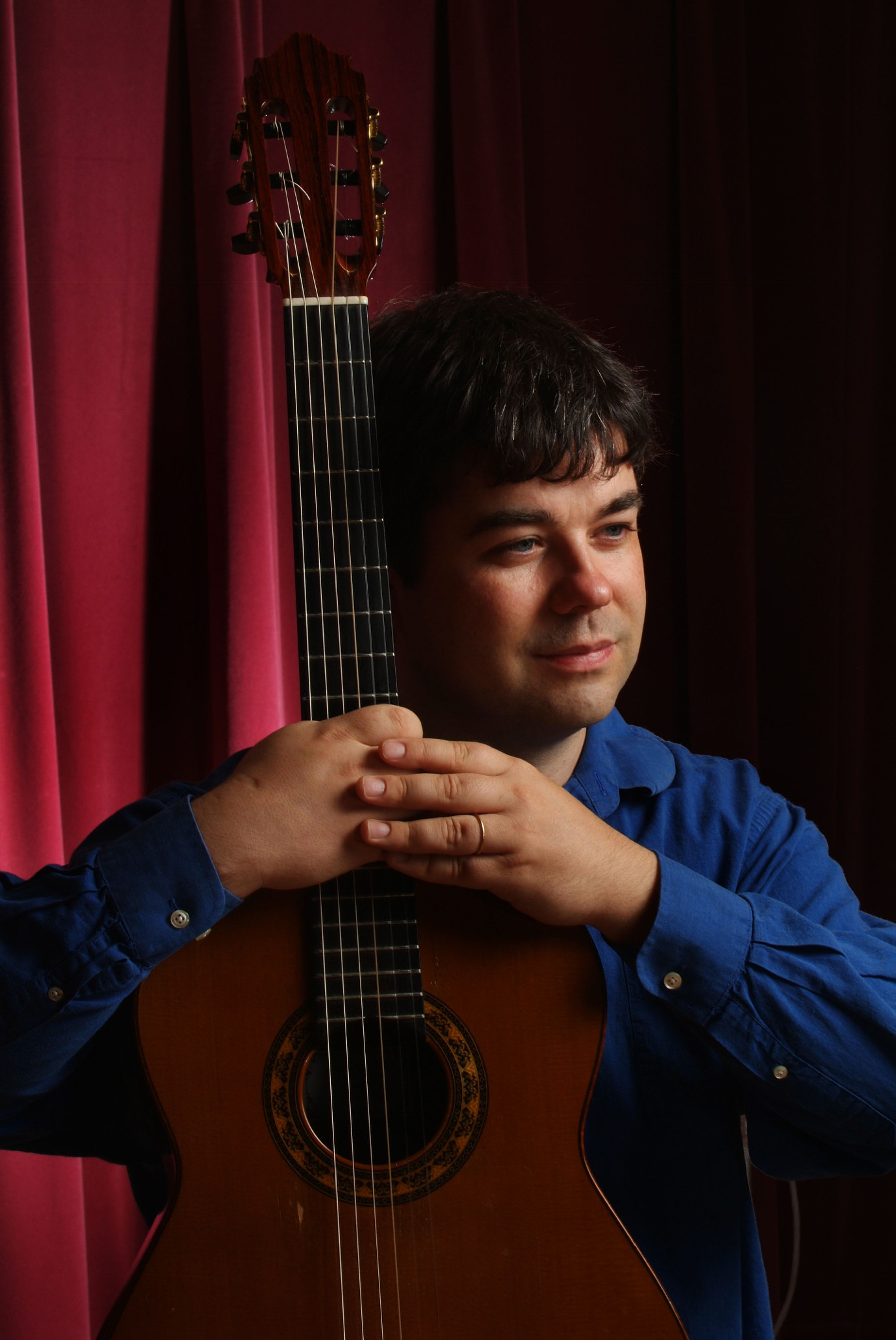 JONATHAN LEATHWOOD is one of the few guitarists to perform on six-string and ten-string guitars, mixing modern and traditional works in his innovative programs. His last London concert led Classical Guitar to call him “a genius”; the Musical Times of London has written of his “remarkable talent and singular artistry,” while Fabio Zanon wrote in Violão Intercambio that “he has to be seen to be believed.”

Jonathan was born in 1970 and has come to Denver from his native England. His first visit to the Lamont School of Music (at DU) was in 1996, when he spent the Spring Quarter as visiting guitar instructor at the invitation of Ricardo Iznaola, then on sabbatical. Recently Denver University awarded him its Artist’s Diploma, the first time they have made this award in individual performance, and made him the first recipient of the Ricardo Iznaola Guitar Scholarship. Jonathan is also guitar instructor at the University of Colorado at Boulder.

Some of Jonathan’s recent recitals include appearances at the International Festival of the Classical Guitar at West Dean, the Nürtingen Festival in Germany, London’s Wigmore Hall (with flautist William Bennett), the Almeida Festival, the Cheltenham Festival (with cellist Steven Isserlis), and the Aldeburgh Festival (with the contemporary music group Jane’s Minstrels). He has performed in Germany, France, Belgium, Holland,Italy and Turkey. He will perform a solo recital in London's Wigmore Hall in November 2011.

Equally known as a collaborator with both performers and composers, Jonathan Leathwood has recorded two albums with the legendary flutist William Bennett (more information), and recorded and broadcast with elite cellists Rohan de Saram and Steven Isserlis. He performs also with flutist Christina Jennings, cellist Richard vonFoerster and pianist Heidi Brende Leathwood. His commissions from composers such as Param Vir, Stephen Goss, Robert Keeley and Chris Malloy have pushed the boundaries of both six- and ten-string guitars. His recordings of Dodgson, Goss and Malloy are available on the Cadenza label.

In 1988, Jonathan was a string finalist in BBC Television’s Young Musician of the Year competition. Since then he has won awards from a number of bodies, including the Park Lane Group, the Countess of Munster Trust, the Myra Hess Trust, the Holst Foundation, the Eric Falk Trust, and the Ian Fleming Trust. He was the first guitarist to record a recital for BBC Radio 3’s Young Artists’ Forum. He has twice performed in the Park Lane Group’s Young Artist Series at the Purcell Room in London. One of these concerts involved an exciting collaboration with the Indian composer Param Vir, whose four-movement work Clear Light, Magic Body was dedicated to him and later published by Novello. He has also premiered works by Robert Keeley, Chris Malloy, Stephen Goss, Mervyn Cooke, and Rodolfo Betancourt. Jonathan is one of the few guitarists to play the ten-string guitar alongside the traditional six-string model, and as a ten-string player he is particularly associated with the innovative and striking music of Maurice Ohana.

Jonathan Leathwood writes and lectures on a range of topics from Bach to Elliott Carter. In 2001 he conceived and edited Guitar Forum, a new scholarly journal for the classical guitar published in the United Kingdom by the European Guitar Teachers’ Association (EGTA UK). The previous year, he was the British delegate at EGTA’s international conference in Cambridge, England, where he gave a lecture on analysis and performance. He has a PhD from the University of Surrey and a Bachelor of Music from King’s College London. He was later invited back to King’s to teach Music Analysis and Techniques of Musical Composition, before eventually moving to the United States in 1998. His principal teachers in guitar have been Gordon Crosskey, Richard Wright, Paul Galbraith, Ricardo Iznaola and the pianist and conductor George Hadjinikos.