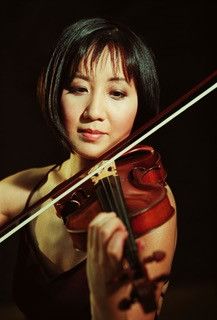 Linda Wang has been praised by critics for her “world-class artistry,” “masterful technique” and “singing jubilant tone”

Since her debut with Zubin Mehta and the New York Philharmonic at the age of nine, Linda Wang has performed concerti with over seventy-five orchestras and maintains a worldwide presence as a performer and educator. She has collaborated with such conductors as Sir Georg Solti and the Schleswig-Holstein Musik Festival Orchestra, Jorge Mester and the Pasadena Symphony, JoAnn Falletta and the Virginia Symphony; and in the US concerto performances include the Wisconsin, Boston Classical and Missouri Chamber Orchestras; the Corpus Christi, Great Falls, Cedar Rapids, West Virginia Symphonies. Internationally she has been soloist with the Robert Schumann Philharmony in Germany, Paris Sinfonietta, Salzburg Chamber Orchestra and Southern Bohemian Orchestra with whom she toured the Czech Republic. In Asia, engagements include Taipei Philharmonia Musical, China’s Harbin Symphony Orchestra and the Philippines Philharmonic Orchestra.

A native of New York City, Linda Wang has studied at The Juilliard School, Colburn School and University of Southern California. Awarded a Fulbright Grant, she pursued advanced studies at the Salzburg Mozarteum. Her principal teachers have been Dorothy DeLay, Hyo Kang, Alice Schoenfeld and Ruggiero Ricci.

A dedicated teacher, Linda Wang is String Chair and Professor of Violin at the Lamont School of Music. Her reputation as an exceptional performer and teacher garners her frequent invitations to be faculty artist at music festivals and present master classes at distinguished music institutions nationally and internationally. Her students have been young artist winners and soloists with the Colorado Symphony Orchestra, National Repertory Orchestra; Denver, Boulder and Lynn Philharmonics to name a few, participating in such major international competitions as the International Elmar Oliviera Violin Competition, Young Concert Artists and International Isaac Stern Violin Competition in Shanghai. Students from her studio have been accepted to such institutions as the Juilliard School, Yale, Cleveland Institute of Music, New England Conservatory, University of Michigan, Indiana-Jacobs, Cornell, Peabody, Manhattan, Eastman, London’s Guild Hall, Royal Academy and Vienna Hochschule fur Musik.

Linda Wang currently performs on a 1767 J.B. Guadagnini and has recorded eight solo albums. Additional information can be found on her website, www.lindawang.com.