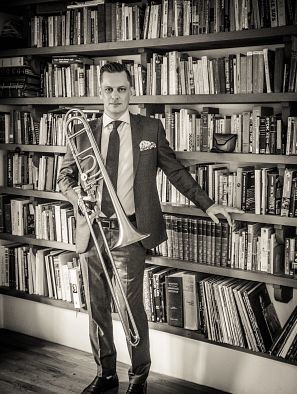 Whether its performing on OSCAR wining soundtracks such as "Joker," the GRAMMY award winning album "Twelve Little Spells" with Esperanza Spalding, or recording solo and chamber music CD's, Richard Harris has crafted an eclectic musical career. As a soloist, chamber musician, orchestral performer, educator and advocate, his performances have taken him all across North & South America, Europe and Asia.
Richard is currently on faculty at the University of Denver and is the former Assistant Principal Trombone of the Cincinnati Symphony Orchestra. He is a regular guest with many of the US’s top symphony orchestras, including the Seattle Symphony, Boston Symphony, The Metropolitan Opera, Colorado Symphony, Buffalo Philharmonic and is a former member of the Radio City Music Hall Orchestra in New York City, where he also performs with many other Broadway productions.
Richard recorded with pop-star Sting on his first studio album in a decade and has performed and toured alongside a diverse range of musicians, such as Puff Daddy, Snoop Dogg, Natalie Cole, Seth McFarlane, Boyz II Men, Megan Hilty, Roseanne Cash, Bryce Dessner, Chris Botti and classical music stars Luciano Pavarotti and Andrea Bocelli.

Mr. Harris is a member of ‘Decoda’ a New York City based chamber music collective which is the first ever Affiliate Ensemble of Carnegie Hall. As a chamber musician he has been a guest artist at Chamber Music North West and has performed with The Canadian Brass, The Empire Brass, The Metropolitan Opera Brass Ensemble, The Lincoln Center Trombone Ensemble, the Boston based string ensemble, A Far Cry and he appeared on onstage at the Park Armoury in New York with the Knights Chamber Orchestra in "The Head & The Load" directed by William Kentridge.

A native of Worcestershire, England, Richard was a scholarship student at the Royal Academy of Music in London. He completed his Masters Degree at Indiana University before spending three seasons with the New World Symphony Orchestra led by Artistic Director Michael Tilson Thomas. In 2010, Mr. Harris was awarded a fellowship in Ensemble ACJW, a program of Carnegie Hall & The Juilliard School and Richard has worked for Carnegie Hall as a teaching artist.

In the mountains of Santa Fe New Mexico Mr. Harris hosts "RichardTromboneCamp!" An annual multi day retreat for brass players to explore and deepen their understanding and knowledge of Brass performance. Richard presents multiple classes and is joined by other leading brass artists throughout the seminar. During the summers he appears at the Raphael Mendez Brass Institute and he is also on faculty at the Idyllwild Summer Arts Academy in California where he coaches high school students in chamber music and orchestral literature.

Richard is strong believer that the arts can be a powerful agent for social change, and he currently serves on the board of "Musicambia" a New York based non-profit which teaches classical music in prisons and jails across the US. He is also the co-ordinator for Decoda's workshop activities at Administration for Children's Services, New York City's child welfare and preventative services department. He is the co-founder and former Executive Director of the Miami Music Project a non-project music education program in Miami Florida. Under Richard's leadership the Miami Music Project raised over $1.5 million in 1 year from it's inception and bought chamber music to thousands of Miami-Dade County public school students.

Richard lives on the Upper West Side of Manhattan with his wife, Margaret their two sons and their English Bulldog 'Churchill.'