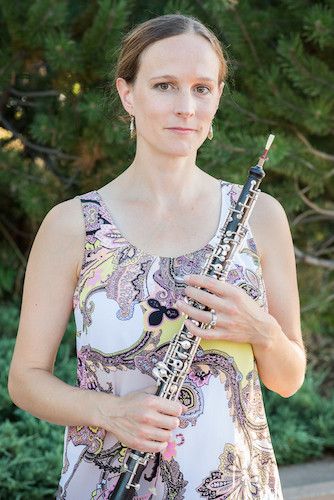 Sarah Mellander Bierhaus was born and raised in upstate New York. Bierhaus is the principal oboist of the Boulder Philharmonic and Fort Collins Symphony Orchestras and plays second oboe and English horn in the Central City Opera orchestra. Her extensive orchestral experience has also included performances with the Colorado Symphony, Colorado Springs Philharmonic, Greeley Philharmonic, Binghamton Philharmonic and Cayuga Chamber orchestras. As a member of the Antero Winds (formerly Arundo Winds), winners of the Plowman Chamber Music Competition and silver medalists at the Fischoff Chamber Music Competition, Bierhaus has performed recitals and educational outreach events across the nation. She has also appeared as a soloist with the Finger Lakes Symphony, Rochester Philharmonic Youth Orchestra, the Carleton College Orchestra and the CU Boulder Symphony Orchestra.

Bierhaus received her BA in music from Carleton College, where she graduated magna cum laude and with honors in musical performance. She holds her MM in oboe performance from the Eastman School of Music and her doctorate of musical arts from the University of Colorado at Boulder, where she received honorable mention in the 2006 Honors Competition. While a student, Bierhaus participated in summer festivals at the Brevard Music Center, Round Top and the National Repertory Orchestra. Her teachers have included Peter Cooper, Richard Killmer, Merilee Klemp, Andreas Lorenz, Laura Griffiths and Cindy Watson. She currently maintains an active private teaching studio and teaches oboe and chamber music at the Lamont School of Music and Regis University.