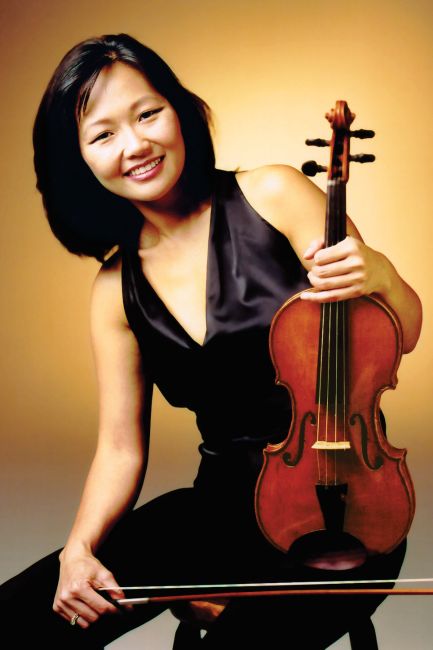 Yumi Hwang-Williams made her debut at the age of 15 as a soloist with the Philadelphia Orchestra, six years after emigrating from South Korea. A graduate of the Curtis Institute of Music, she is an artist of exceptional musicianship known both for her thoughtful and stylish interpretations of the classics and for her commitment to the works of contemporary composers. Strings magazine calls her a "modern Prometheus" who has "emerged as a fiery champion of contemporary classical music." Her interpretations of works by Thomas Adès, Aaron Jay Kernis, Michael Daugherty, and Christopher Rouse have earned critical acclaim as well as enthusiastic approval from the composers. After playing Korean composer Isang Yun's Violin Concerto No. 1 with Dennis Russell Davies and the Sinfonieorchester Basel (Switzerland), Davies immediately invited her to play the concerto again with the Bruckner Orchester Linz (Austria). The two will present the composer's Third Concerto in March 2015 in Basel and on the orchestra's Asian tour in Shanghai, Hong Kong and Tongyeong (South Korea).

In a review of a performance at the Cabrillo Festival, the Santa Cruz Sentinel said "Yumi Hwang-Williams brilliantly elucidated Daugherty's virtuosic violin concerto, Fire and Blood, with ringing tone in the demanding high-velocity sections and melting tenderness in the slower ones." Also at Cabrillo she was soloist in Thomas Adès' concerto Concentric Paths, with Marin Alsop conducting.

Hwang-Williams has soloed with the Cincinnati Symphony, the Indianapolis Symphony and the Santa Rosa Symphony with conductors Paavo Järvi, Lawrence Leighton Smith and Jeffrey Kahane, and has made numerous solo appearances with the Colorado Symphony Orchestra (CSO) and conductors Marin Alsop, Peter Oundjian, Douglas Boyd, Hans Graf and Jeffrey Kahane. Last April, she collaborated with cellist Wendy Sutter and the CSO in a performance of the Philip Glass Double Concerto, and in February she'll play Glass's Violin Concerto No. 2, the "American Four Seasons," with Cynthia Katsarellis and the Pro Musica Colorado Chamber Orchestra. She's scheduled to play Vivaldi's Four Seasons with virtuoso harpsichordist Kenneth Cooper and the CSO in January 2015, and in May she'll play the Beethoven concerto with the CSO and conductor Cristian Macelaru.

Hwang-Williams is an avid chamber musician and recitalist. She has worked with many of today's top artists, including Gary Graffman, Ida Kavafian, Christopher O'Riley, Jon Kimura Parker and Robert Koenig and has taken part in Denver's Friends of Chamber Music, the Litton Chamber Series and Music on the Mountain as well as chamber-music series at Colorado College and the University of Colorado, Boulder. She's a former member of the Felix Quartet and the Tre Voce Piano Trio and has been featured many times on National Public Radio and Colorado Public Radio. This fall she collaborated with University of Denver clarinetist Jeremy W. Reynolds to perform and record two previously unrecorded works for violin, clarinet, and piano by the American composer David Maslanka. She is looking forward to playing the Brahms Horn Trio with Andrew Litton and CSO Principal Horn Michael Thornton this December at Carnegie Hall.

Since 2000, Hwang-Williams has been concertmaster of the Colorado Symphony. She was concertmaster of the Cabrillo Festival Orchestra for twelve years and is a frequent guest concertmaster for the National Arts Centre Orchestra (Ottawa) at the invitation of Music Director Pinchas Zukerman. Before coming to Denver, she was principal second of the Cincinnati Symphony and a member of the Concerto Soloists (now Chamber Orchestra) of Philadelphia. She has played, toured, and recorded extensively with the Philadelphia Orchestra and continues to be invited there as a guest first violinist. She is a faculty member at the University of Denver Lamont School of Music, where she specializes in orchestral studies. She is married to Daniel Willams, a horn player in the Philadelphia Orchestra, and they have a daughter, Ava.

Hwang-Williams plays on a violin made by Carlo Landolfi in Milan, c. 1752. For more information, visit her website: yumihwviolin.com