French playwright Moliere's The Misanthrope comes to life in the Theatre Department's production of this comic verse play. From its first premiere in 1666 to its upcoming productions at the University of Denver this February and March, The Misanthrope urges us to ask, "what would happen if we always said exactly what we mean?"

The story of one man's prideful promise to "be sincere and never part with any word that isn't from the heart," takes its audience through a world where words become weapons and sincerity is revealed to be much more complicated than it seems.

"Now more than ever the classics are incredibly relevant. They have something to say to each new generation every time they are produced," explains Director Sabin Epstein, adding with a warm laugh, "I mean, do we live in a culture of hypocrisy?"

Epstein continues, "This is a play about a character who is at unrest, who uses dark humor, wit and irony" to explore major philosophical questions about human nature. At the same time, it is a play about the personal. "The core of the play is a love story" in which the protagonist misguidedly believes that "the bright flame of his love" can purify the woman he cares for.

Even as we laugh at the wry humor of The Misanthrope's two-faced characters, we come to recognize our own day-to-day hypocrisies, however small or large they might be.

"This is a comedy of character play," Epstein teaches, "there are no pies in the face." Instead, the humor is subtle, developing as we connect to characters whose words in Act One "suddenly twist in the fifth act, revealing who people truly are" and encouraging us to think about our own lives in the process. 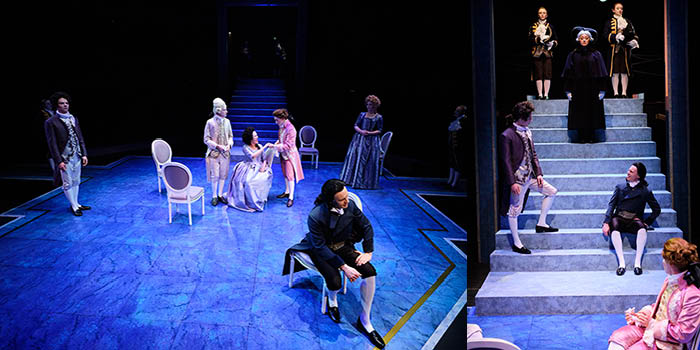 DU's production is set in Paris in July of 1789, a period that recalls the potent energy of the French Revolution. Epstein suggests this dynamic and tumultuous time has much to teach us today. In any time and place, "there is always a learning curve, always more we can learn" when we let ourselves be "excited by what we see and hear and realize its alive."

As costumed actors enter the intimate space of the Byron Theatre, it's easy to see how Epstein's directorial approach has made this play contemporary and immediate for each of them. "To work with a professional and learn different styles of artistry is incredibly valuable," says Anya Strauss, who plays Arsinoe.

"I'm the youngest actor, so I'm very honored that Sabin saw a maturity in me to be able to play the oldest character," Strauss adds.

Strauss describes the challenges of acting in a period piece, complete with complex dialogue in rhyming couplets and costumes that can take 20 minutes to put on. Assistant Stage Manager Newt Fantalis, who has been working on costume construction for weeks, explains many of the pieces have been constructed from scratch in order to be historically accurate.

The streamlined set and minimal props focus all attention on the actors themselves. Conway and Sage have been working diligently to bring the lyricism of the language to life. "It's easy to get caught up in the music of the rhyming lines," Epstein notes, "but it's important to play the lyric and not the music."

The actors have spent much of their time learning how to hear the nuances of what these lines are saying, rather than getting swept up in the rhythms of the language. And it's paid off: Conway and Sage verbally chase each other around the stage, exclaiming in a quick shout one moment and shifting into a barrage of witty declarations the next.

In a play that's so much about the ways words themselves shift and change, multiply in meaning, and reveal their characters' truest natures, The Misanthrope serves as a relevant and accessible social satire. As Strauss says, "the language is modern, the whole play is modern. It's a powerful commentary on humanity for me."

The Misanthrope runs from Thursday, February 28-Sunday, March 10, 2019 in the Robert and Judi Newman Center for the Performing Arts. You can purchase tickets in-person, by phone, or online through the Newman Center's website.