Study Spanish with peers on campus and around the world

When you choose to study Spanish language and culture at DU, you're embarking on a global journey that will help you broaden your understanding of the Spanish-speaking world. Majors who meet the academic qualifications can also apply for distinction by writing an honors thesis in Spanish. Alternatively, you can add a Spanish major or minor to another degree program to diversify your academic portfolio and make yourself a more attractive job candidate post-graduation. For students joining us with a family background of Spanish language skills, our Spanish for Heritage Speakers program offers robust study to complement and enhance your proficiency.

As part of a private university dedicated to the public good, we ensure that students are active in the Spanish-speaking community both in Colorado and beyond through internships at local organizations and service-learning opportunities.

DU offers both major and minor courses of study within the Bachelor of Arts program in Spanish. Through the Spanish major, you'll develop advanced language skills in both oral and written Spanish, including the distinct traits of the language as spoken in Europe, Latin America and the United States. Students can expect to complete the program with high confidence in their speaking abilities and a robust understanding of the cultural and historical context of the language as well as a well-rounded experience of literature written in Spanish.

The Spanish minor offers the chance to add Spanish language skills to your professional toolkit while you focus on another area of study for your major. The Spanish minor couples language learning with cultural and literary study. Whether you're majoring in the natural sciences, international studies or arts and culture, a second language can broaden your appeal to employers and help you navigate an increasingly globalized world.

Students wishing to dive deeper into their Spanish studies are encouraged to enter our honors and distinction program. Those wishing to graduate with honors and departmental distinction work closely with a faculty member to produce a senior thesis of original research, written entirely in Spanish.

Spanish for Heritage or Bilingual Students

To address the educational needs of our increasingly diverse student population, we've developed a program aimed at students entering college with a foundation in the Spanish language. The program includes two courses that help heritage or bilingual speakers develop their skills for use in academic and professional settings, also helping to build an understanding of the unique cultural forces that Spanish speakers experience in the modern world.

Check our knowledge base for more detailed information, guides and resources. Can’t find what you’re looking for? You can also use the knowledge base to contact our staff. 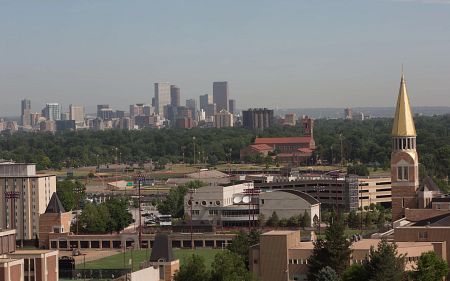 Our faculty and students extend their work beyond the classroom and engage with the community.

An introductory and interdisciplinary course on the political, historical and cultural dynamics that have shaped Latin America, the Caribbean and U.S. Latinos. An examination of the political and intellectual movements and economic forces embedded in relations of power from pre-Colombian civilizations, colonialism, independence, nation building and imperialism to the struggle for democracy. Analysis of diverse cultural practices such as literature, music, film and visual art within a national and transnational context. This course counts toward the Analytical Inquiry: Society and Culture requirement.

This course proposes to critically interrogate the complex relationship between the Muslim, Christian and Jewish communities of the Iberian Peninsula, and the lasting impact of the historical relationship between these communities on the culture, literature, art, politics and economy of Spain, with particular emphasis on the period 711–1700. Special attention is paid to problematizing the notion of ‘convivencia’ and to considering how diverse representations of the ‘three cultures’ are appropriated in the construction of national(ist) ideals that are overtly reflected in literature and art, both in Medieval and Early Modern Iberia and in contemporary Spain.

Introduces the student to the Caribbean region, particularly examining cultural characteristics of the Spanish-speaking Caribbean, with an emphasis on race relations and the contributions of peoples of African descent. The focus is interdisciplinary and includes readings on anthropology, religion and history among other subjects, together with close readings of literary texts.

Spanish students who have not taken Spanish courses and do not have a background of speaking Spanish will enroll in Spanish 1001.

Spanish students who have studied Spanish will take a placement test before enrolling to determine an appropriate class level. Placement testing is conducted by DU's Center for World Languages & Cultures.

Set Up a Placement Test