The Department of Media, Film & Journalism Studies is proud to announce our partnership with IRISE (Interdisciplinary Research Institute for the Study of (In)Equality) for their 2021 Institutional Justice Event Series. We are collaborating to bring a number of speakers to campus on Wednesday, September 29, 2021, for a full day of events centered around race and justice, representation, gun violence, Black Lives Matter and criminal justice reform. 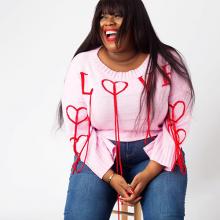 Shaina Harrison (she/her) will be honored as this year’s Estlow Center Anvil of Freedom lecturer. Harrison serves as the New Yorkers Against Gun Violence (NYAGV) Director of Education, and has designed, developed and led the NYAGV anti-gun violence program for youth since it was launched 13 years ago. She has trained more than 5,000 young people and is a recognized social movement leader who has leveraged traditional and new media to amplify the voices and lived experiences of young people interested in racial and gender justice. Harrison is also a social media influencer with more than 8,000 followers. 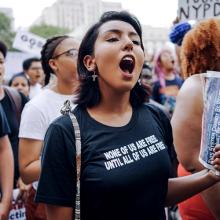 The 2021 Morton L. Margolin Lecturer will be Andrea Alejandra Gonzales (she/they), former Operations Manager for Youth Over Guns and current Education Specialist for NYAGV. Gonzales is a 20-year-old Queer Mestiza advocate and organizer for marginalized youth. Organizing at the intersection of racial justice, gender justice, educational justice and abolition since the age of 15, Gonzales has always been focused on empowering, educating and liberating her community from oppressive systems by any means necessary. 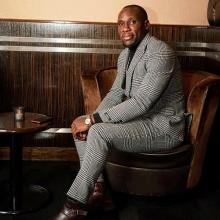 We are also proud to welcome Frank Teah (he/him) as this year’s Media, Film & Journalism Studies Lecturer. Teah is the current Program Director of NYAGV, where he works on a small team tasked with adding to and implementing a gun violence prevention curriculum named REACTION in schools that NYAGV partners with across New York City. Teah’s goal is to equip all of his students with a keen understanding of how power dynamics shape people’s experiences everywhere, and how they can use their knowledge and voices to help advocate for themselves and others.

All three speakers were chosen for their work in educating young people about ways to engage in policymaking through social media to bring about positive change. This marks a shift from our tradition of honoring journalists for these awards, but we are excited to host speakers who are approaching media and communications from a new angle. We recognize that traditional journalism is changing, and that the ways that young people, and in particular college students, come to be informed about the issues that affect their peers and communities are also changing. Harrison, Gonzales and Teah have been leveraging traditional and new media to help get evidence-based conversations into communities that might not be reading traditional newspapers. This new direction may help journalists think about bridge building to younger audiences, and for younger audiences to be introduced to the role that journalists are still playing in the news ecosystem, in order to keep journalism strong and vital for the future.

Harrison, Gonzales and Teah will lead two master classes on systemic racism and gun violence in America on Wednesday, September 29. The classes will follow their NYAGV ReACTION curriculum.

Our speakers will also be participating in the IRISE Kickoff Panel that evening alongside Julian Rubinstein, Visiting Faculty and author of The Holly, and Jim Freeman, affiliated faculty in the Social Movement Support Lab and author of Rich Thanks to Racism. The discussion will be moderated by IRISE Community Scholar Hasira "Soul" Ashemu of the Righteous Rage Institute. 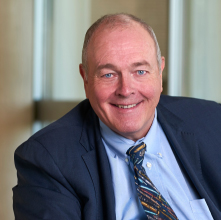 In addition, the University of Denver will honor William “Dean” Singleton with the 2021 Journalism in the Public Interest award for his many contributions to journalism and public life.

Dean Singleton, who started out as a part-time reporter at age 15 and bought his first newspaper at 21, went on to build the second-largest newspaper company in the U.S. with his MediaNews Group. Under his leadership as publisher, the Denver Post won four Pulitzer prizes in breaking news and photography. Singleton, who received an honorary doctorate in humane letters in 2012, served on the University of Denver’s Board of Trustees from 2003-2006 and has contributed to journalism and to public life in numerous ways, serving on the Boards of the Associated Press, the Denver Center for the Performing Arts, and the Rocky Mountain MS Society among others.

Gregory Moore, University of Denver trustee and former editor of the Denver Post, will provide an introduction to Dean.

Also recognized will be Fred Brown, former president of the Society of Professional Journalists and longtime political reporter at the Denver Post who is retiring from teaching for 15 years with the University of Denver’s Department of Media, Film & Journalism Studies. 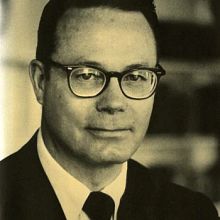 Each year, the Estlow International Center for Journalism & New Media works with industry professionals and academic leaders to select the Estlow lecturer and recipient of the Anvil of Freedom Award. The Estlow Center invites the honoree to serve as a keynote lecturer at a university-wide event, which recognizes outstanding contributions to journalism and democracy, and also to speak with classes and student groups during his or her visit to campus. For more than a dozen years, the Department of Media, Film & Journalism Studies has been home to the Estlow Center, whose mission is to contribute to the public good by improving the understanding of how people make meaning out of journalism, digital media and popular entertainment.

The Estlow Lecture began in 1993, and the Anvil of Freedom award first was presented in 1997. The award recognizes superior leadership and commitment to ethics, integrity and democratic freedoms, especially the protection of the First Amendment. The event forges interdisciplinary and cross-institutional connections and enables the University of Denver to serve as host for a fulsome exploration of the state of journalism and its evolving relationship to the democratic self-governance so central to U.S. identity. 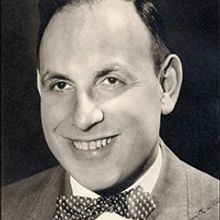 Beginning in 2015, the Morton L. Margolin Distinguished Lecture has been given each year in honor of renowned Colorado business journalist Morton Margolin. During his distinguished 35-year career as a journalist with the Rocky Mountain News and the Colorado Business Magazine that he co-founded, Margolin received many awards, including a nomination for the Pulitzer Prize. His series of news stories exposing controversial U.S. reclamation projects in the Riverton, Wyoming, area in 1952 won him that nomination.

Prior to the Morton L. Margolin Distinguished Lecture Series, the University of Denver School of Communication and the Denver College of Business presented the prestigious Morton Margolin Prize recognizing Distinguished Business Reporting in Colorado from 1980 until 2008. A group of Margolin's friends established the award following his death in 1978 to recognize his career as a business journalist for local publications, including the Rocky Mountain News and Colorado Business Magazine.

Find out more about the Institutional Justice Event Series and register to attend.