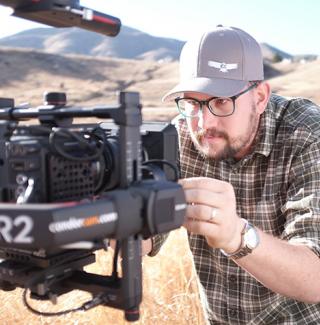 The 2018 Alumni Service to AHSS Award was presented on Thursday, May 17, 2018 to MFJS alumnus Frazer Lockhart (BA '11), a former Film major and one of the alumni mentors of Project DU F.I.L.M.

The award is presented to a College of Arts, Humanities & Social Sciences alum "who has made significant contributions to the liberal arts at the University of Denver. He/She has offered his/her  time, expertise, enthusiasm and energy to improving liberal arts programming at DU and has helped to promote CAHSS traditions at DU."

Frazer was selected for this prominent award because of his mentorship and leadership as a part of Project DU F.I.L.M (Film Initiative Linking to Mentors), a program that connects current DU students with alumni who work in the film industry as both work together to create a short film. MFJS Associate Professor Sheila Schroeder invited Frazer to be the cinematographer for DU F.I.L.M.'s first project, Happy F!@#ing Valentine's Day, which premiered at the Longmont Front Range Film Festival in 2016. Project DU F.I.L.M. has just completed its second film, Scary Lucy (which premiered in Denver in May), with Lockhart in the same role.

"Frazer Lockhart is the best partner I could imagine for Project DU F.I.L.M." Schroder said. "Not only is his own work creative, professional and all about the story, but the time he takes with students and recent alumni is incredible. He is a true creative partner with our directors, planning visuals that advance the story in unique ways. He is a patient and instructive mentor to his camera team, and he makes time to answer questions for anyone on set interested in the art and craft of cinematography."

When asked about his work with Project F.I.L.M., Frazer said, "What's really cool about Project DU F.I.L.M. is that we operate in the same way that an industry set would, and we hold the students working on the film to that same standard." Students have the opportunity to gain real experience working in the field, instead of simply spending time in the classroom or working solely with other students.

Frazer said providing these experiences fills in the educational gaps surrounding the technical side of the filmmaking. "The DU Film Program does an incredible job of teaching both storytelling and critical thinking—not just how to make a film, but why," he remarks. But Project DU F.I.L.M. "gives the students access to some of that industry insider knowledge."

"It's also really great for me because I get to develop relationships with a lot of those students," he said. "I get to see them grow throughout the duration of the project, and in many cases I've hired them on for additional projects later on and even developed real friendships with them. It's cool because the mentorship aspect doesn't really end when the project is done."

Frazer joined the University of Denver community as a student in 2007. He said that one of the reasons he chose DU was because of the interest students had shown in their work.

"I remember touring a few different colleges when I was 17 or 18 and I just wasn't really feeling like there was anything special about any of them. Whenever we'd poke our heads into a class, all the students were just completely checked out—it was like they were just there because they had to be. . . . When I toured DU, there was an energy about it that felt very different. Students were engaged in classes and genuinely seemed invested in what they were doing. I applied the very next day."

"I really believe that there is incredible value in a liberal arts education, especially for someone with as many passions as I have," he said.

Today, in addition to working with Project DU F.I.L.M., Frazer is a freelance cinematographer with professional experience filming in 36 different states and 7 countries. He loves the challenge and excitement of working on so many different projects: "Every job has its own unique challenges and curveballs, and when you get to a certain level in the film business there is absolutely zero room for error. I love that. I love tackling a new challenge every day. Plus, I get to create things for a living!" he said. "How awesome is that?"

Frazer's advice to current students is to seek to continue to learn after college: "DU is a great start, but it's just the start. This industry changes daily, and if you don't stay on top of it, it'll get away from you really quickly. Embrace that passion and just throw yourself in the deep end. If you can take the skills you learn at DU and keep building on them every day, this crazy business can be the most rewarding and fulfilling thing you'll ever do."