University of Denver alumnus Lam Nguyen (BA ’05) won an Adobe Editing Award at the South by Southwest® Film Festival this year for his work on the film R#J. R#J is a modern spin on Romeo and Juliet, conveyed through the lens of an iPhone. 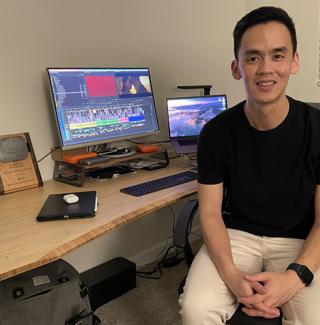 Nguyen worked on the film for two years, despite initially being hesitant about the idea of the classic remake and the potential challenges of telling a story entirely via the characters’ iPhones. After meeting with the director to discuss the premise of the film, Nguyen changed his mind. He was convinced that the project would not only do justice to the story cinematically, but would also present a diverse and fresh take on the traditional Romeo and Juliet story.

The film had a very successful premiere at the Sundance Film Festival, which resulted in Adobe reaching out to Nguyen for a video interview panel. A few weeks later, the SXSW festival announced that R#J had received the Special Jury Adobe Editing Award.

“I never ever thought I’d win an award, let alone be a part of major festivals. The night that I found out was a huge shocker and an emotional moment for me. It encapsulated 17 years on this journey, and I just felt so grateful and honored to be acknowledged for the work. This meant the world to me and this award has opened more doors than I’d ever dreamed of,” Nguyen said.

When asked about the aspects of his DU education that especially guided him through the filmmaking process, Nguyen mentioned his production classes. The hands-on experiences these classes offered helped him learn the ropes of the trade.

The prominence of graphics in the film led to Nguyen to use the Adobe Suite for most of the editing work. Adobe’s dynamic linking system allowed the apps to work together seamlessly, making the production work more efficient.

The project presented several challenges during production and post-production. Each iPhone user interface needed to be faithfully recreated. The film was finished in 4K, which added even more tedious jobs, such as re-drawing all of the text bubbles to be more realistic.

The creative storytelling aspect was a challenge too, as the team had to think of creative ways to depict Romeo and Juliet falling in love strictly through various apps on their iPhones. “The challenge was how can we connect the audience emotionally without really seeing their faces or even seeing them together at the same time?” Nguyen said.

Nguyen and his team worked through the constraints of the iPhone format by breaking away from it with Facetime calls and Instagram live scenes. "We felt more confident that this would work by merging traditional filmmaking aspects that we’re used to into this new screenlife format," Nguyen said.

They found innovative ways to convey the personal connections in the film through the use of TikToks, character reactions, and sharing of Spotify playlists. They also gave the film a good balance of faces and beautiful scenery in the film through Facetime and Instagram live moments. These ideas made the film more relatable to the viewers.

Nguyen hopes to produce and direct his own stories one day, with the ultimate goal of inspiring people in their own way, saying “I hope to give back someday with all the support and advice I’ve gained over the years."

When asked what advice he would give to others who hope to become profession filmmakers, he said, “I’d like to mention to not feel discouraged when you’re sharing drafts for feedback. There’s really no right or wrong way for a note, but there’s a note that’s best for the story and as a team we work towards that unified vision.”

Finally he said, “always believe you can make something out of nothing!”

Check out a recent episode of the Just an Editor podcast, featuring Lam.