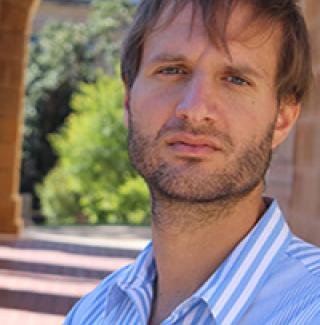 David Coppini, PhD, assistant professor in strategic communication at DU and native-born Italian, first became interested in the mass communication field in part thanks to Italian media tycoon Silvio Bersculoni. Bersculoni served as Prime Minister of Italy for four different terms, despite his background in cable television and publishing and lack of government experience. Watching the relationship between media and politics change as Bersculoni influenced news coverage in Italy struck a chord with Dr. Coppini early on. “I got really interested in it as a kid, and he’s one of the main reasons I decided to major in communication in college,” Coppini said.

His family also inspired him to explore the connection between communication and politics. “Political discussions have always been something that’s been a part of my family life, and both of my parents were political activists back in the 70s and 80s,” Coppini explained.

As an undergraduate, Coppini had the opportunity to study abroad in San Diego, California, which inspired him to pursue graduate school in the U.S. After college, Coppini worked in the advertising and strategic communication fields in Italy and New York before making the 4,700+ mile move to Madison, Wisconsin to pursue a Ph.D. in mass communication from the University of Wisconsin.

Working and studying in both Italy and the U.S. allowed Dr. Coppini to note the vast differences between the practices of the industry between the two countries. He says that moving to the U.S. allowed him to explore new opportunities in both research and practice that he likely wouldn’t have gotten otherwise.

Now Coppini is in his fourth year in the MFJS department at DU, where he teaches classes such as Politics & Media, Social Media Strategies and Strategic Messaging. Coppini loves getting to work and live in Denver and sharing his passion for communication with students. His time at DU has allowed him to work on a number of community engagement research projects, such as his partners with Colorado Media Project, where he which explores trust among Coloradans in the local news sphere alongside fellow MFJS assistant professor Kareem El Damanhoury, PhD.

“I love that we have small classes, and as a professor I can coach students on specific projects,” Coppini explained. “In most of my classes, students work with a real client and I get to guide them along.”

For Coppini, building relationships with students and then getting to follow their careers is one of the most satisfying parts of the job.

“When it comes to teaching, it’s always great to see students go out and do great things in the industry,” Coppini said. “DU really values scholarship and research that benefits the community, which is one of the reasons why it’s so great to work here.”

As in a professor in a constantly changing field such as strategic communication, Coppini sees a number of trends in the industry that he thinks could potentially change the way his students work in their professions in just a few years.

“In advertising and public relations, augmented reality is something [gaining traction], which we’ve already begun to see with Instagram and other brands and companies,” Coppini explained. “Another trend that you see a lot right now is the correlation between advertisements that you see on TV and ads on social media. Every company that wants to be successful needs to have a really good strategy for social media.”

In the future, Coppini is hopeful that he will be able to conduct media research on larger and larger scales

“In the past year, I’ve focused on a lot of research at the local Colorado level, but my dream is to do something on the international level,” Coppini said.

Whether he’s conducting research on media and politics or teaching students new and innovative social media strategies, the ever-changing media landscape means Coppini will always have something new to look forward to for years to come, in and outside the classroom.