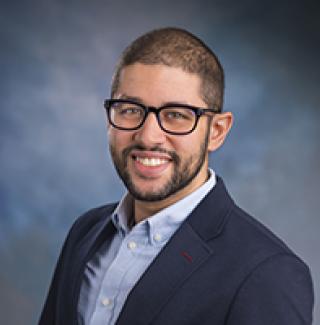 On Thursday, October 22, Kareem El Damanhoury, PhD, was honored as this year’s Livingston Lecturer. The John Livingston Endowed Lecture Series in World History is hosted by the College of Arts, Humanities and Social Sciences at the University of Denver and celebrates the research of a member of the CAHSS faculty. This year’s lecture was titled: “Warfare from Cave Walls to Instagram: How authoritarian states and extremists weaponize visuals.”

El Damanhoury joined the Department of Media, Film & Journalism Studies as an Assistant Professor in 2019. He is a faculty affiliate of the Korbel School of International Studies’s Center for Middle East Studies, the founder of DU Media, and a journalist and producer for CNN International. His research focuses on visual communication, international/intercultural communication, and media and conflict. Much of his work over the past few years has centered on the use of new media and visual communication strategies by nation states and violent militant groups as well as on the emergence of alternative proto-state media systems. He is the co-author of the Oxford University Press book “Proto-State Media Systems: The Digital Rise of Al-Qaeda and ISIS” and the author of the University of Georgia Press book “Photographic Warfare: ISIS, Egypt and the Online Battle Over Sinai.”

“Visuals never cease to amaze me,” says El Damanhoury. Drafted into the Egyptian army two days before the Egyptian Revolution in January 2011, he says he was struck by the stark difference in his perception of the conflict when he was in the compound completing basic training versus out on leave. During basic training he relied on a portable radio for the (limited) news. Once he left he had access to videos, photos, and broadcasts that painted a very different picture. He realized that, whatever he “went on to do, visuals would be a part of it.”

During his lecture El Damanhoury led the audience through a history of propaganda, from its first beginnings as a tool to build support and enthusiasm for a nation or a faith, to its use in World War I and beyond as a method of vilifying the enemy. Today’s propaganda isn’t as distinct: extremist groups such as Al Qaeda, ISIS, and white supremacists have honed their tactics by mixing together truth, half-truth, and limited truth into a sophisticated cocktail that’s impossible to call out as purely lies.

He went on to describe 4 main themes he’s come across in ISIS and other extremist groups’ visual media. First, they describe themselves as borderless entities, using boundaryless maps to illustrate their growing reach. They project a strong sense of utopianism by appealing to nostalgia, or contrasting images of the struggling “them” versus the thriving “us.” Next, they are incredibly strategic in how they use visuals. They look at trends and tropes that the international media industry uses and then use those same methods to disrupt the newscycle, to force the media industry to use their images and videos and to continue to spread fear. Finally, they demonstrate a great sense of visual literacy. Their media teams are taught the same skills El Damanhoury teaches his students at MFJS, and they use established photography techniques to influence the viewer in a professional way.

While the world will have to combat extremist groups like ISIS and white supremacy organizations on multiple fronts, El Damanhoury believes that a strong media response is one factor that can help diminish the impact of their strong visual propaganda techniques. He described techniques that haven’t worked in the past, calling out the U.S. State Department’s 2014-2015 campaign, “Think Again, Turn Away,” which was widely considered to be a failure due to its shallow, culturally insensitive, religiously un-nuanced approach. He also discussed social media crackdowns, which may work initially but eventually fall short as extremist groups are able to change tactics quickly to remain under the radar.

One medium that has had a positive impact, he says, is entertainment education. He mentioned the Muslim faith-based television series “Al Seham Al Mariqa” (“Rogue Arrows”), which uses compelling characters, cultural nuance, and strong storytelling to cultivate a real-life distrust for ISIS in its viewers.

The strongest method of combating extremist groups’ visual tactics, El Damanhoury argues, is through digital literacy training. He listed statistics, saying that 80% of middle schoolers believe that sponsored ads are real news stories, that 80% of high schoolers lack serious questioning skills when looking at social media, and that 1 in 4 Americans say they are open to conspiracy theories. If media literacy training was required for all people – youths and adults – we would all be better at recognizing misinformation and propaganda, and extremist groups’ ability to use visuals as weapons of war would be far more limited.

Today, we can do our part by supporting student media, and investing in the future of journalists and media professionals who will be leading the fight against misinformation in the future.

You can listen to the full recording of El Damanhoury’s lecture on YouTube.