Imagine this: A flight leaving Denver International Airport (DIA) has an engine malfunction and starts haphazardly strewing parts of itself across suburbs of Denver. Who do you call? In the case of saving the airport’s image and communicating with the media, you call Emily Williams (MA '12), who is a Public Information Officer for DIA. 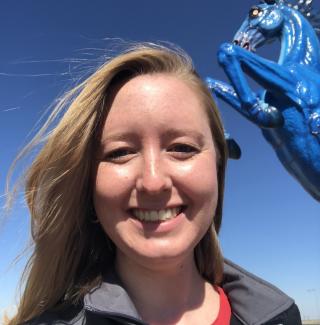 Williams is a seasoned Public Relations (PR) professional who has been working full-time in the field for over 10 years now. When she is not dealing with a crisis like a plane’s engine exploding, she is working 50 hours a week making sure that DIA’s communications with key publics, like airport goers or Denver residents, are delivered effectively and promptly.

“I think that especially in public communications I keep in the forefront of my brain that it is my duty, it’s my job to communicate information that people need to know,” said Williams about the basic premise of PR.

During her work week, Williams’ day-to-day responsibilities can vary. The team that she leads does everything from working with the media directly by answering questions or pitching proactive stories, to crafting messages for key publics, meeting with key stakeholders, and also handling DIA’s social media accounts.

In talking about these responsibilities, Williams said, “[being on call] is cool I mean it means that I kind of have a front-row seat to airport operations on a day-to-day basis. It can be a little frustrating on holidays and weekends.”

Delivering messages to key publics effectively and promptly is the core fiber of PR as we know it today, but PR has gone through evolutions throughout its history.

It started in the Press Agentry stage, in the late 1800s, which was focused entirely on one-way communication from organizations to publics and had no qualms bending or even breaking the truth to generate interest.

Today’s PR has evolved into a two-way symmetrical model in which there is a two-way flow of information between organizations and their publics. The emphasis on the two-way nature of the communication is key and represents a feedback loop of sorts.

A PR team communicates their message and the public receives it, then the publics can communicate their opinions back which then influences more messages.

These messages are often communicated via the news. “My team is responsible for working directly with the media, so responding to their questions, and it’s always our goal to respond to them in a timely manner,” said Williams about working with the media.

Since PR is such a specialized communications function, higher education is crucial for landing a job. A bachelor’s degree is basically required, but a master’s degree is not necessarily a must.

Williams got her master’s from the University of Denver in Strategic Communications. In reference to the utility of a master’s degree in the field, she said, “I think, having that theoretical background that I got as a master’s student at DU was really important, and it just exposed me to cool campaigns.”

Much like a master’s degree, an internship in the field is not a requirement, but it can be incredibly helpful in finding a job. Williams interned with the City and County of Denver for the Department of Public Works where she gained a mentor who helped her to build skills to excel in the field. Sourcing internships can be done through universities’ career services departments and also independently through services like LinkedIn.

It is estimated that there are around 240,000 PR professionals in the United States. A typical salary as a junior PR specialist would be anything from $34,000-$45,000 a year and a senior might make $80,000 to upwards of$100,000 annually. With competitive salaries like these, PR is a rising job sector. According to the Bureau of Labor Statistics, the job growth outlook from 2019-2029 is 7%, which is above average.

A growing field like PR will often have growing pains, and one of these pains across the time of its historical growth and also into today is the issue of ethics.

She has had to apply this ethical code to the COVID-19 pandemic, which has had a huge impact on the airport. Williams has felt pride in the ways that she and her team have been able to communicate requirements honestly and effectively regarding safety in the airport during the coronavirus.

William’s career as a PR professional has been marked by consistency at every stop she has made. Whether it was with the Department of Public works, CU Denver, or eventually DIA, she has focused on the relationship-building side of PR and upholding her ethical standards.

“I’m going to be a lot more effective building relationships if I approach everyone with the decency and respect and humanity that they deserve,” Williams said.