Cranes of the Equinox: Student Trip

Joe Brown, filmmaker and Assistant Professor of Media, Film & Journalism Studies (MFJS) led a student trip to Kearney, Nebraska this past March in partnership with Philip Tedeschi and Dr. Sarah Bexell from DU’s Institute for Human-Animal Connection (IHAC). Six students between MFJS and the Graduate School of Social Work (GSSW) took part in this outing. The trip was supported by Ethan Crawford, Director of Technical Services for MFJS. The goal was for students to observe and film the great sandhill crane migration. This trip was part of an interdisciplinary partnership between MFJS and IHAC, who have each placed a high priority on the protection of species and ecosystems.

An iconic American avian, the sandhill crane is distinguished by its red crown and impressive stature, standing up to four feet tall with a six-foot wingspan. Cranes have made their home on our continent for 10 million years and have been roosting on the Platte River since it was formed. Brown commented, "There's something about these birds. They are one of the oldest bird species on earth; this migration has been taking place for millions of years. When you witness it, you feel like you're part of something bigger than yourself.”

Each spring, sandhill cranes migrate from Mexico to as far north as Siberia. Roughly one million cranes stop in the Great Plains for 4-6 weeks to roost on the sandbars of the Platte River. The shallow water works as an alarm system, notifying cranes of approaching predators. During the day, the cranes feast on agricultural remnants on nearby corn fields and return to the relative safety of the river at dusk. The nourishment and rest available to sandhill cranes in this region is essential to their long migration.

On the first day of the trip, students utilized photography blinds at the Rowe Audubon Sanctuary to observe the cranes in the early morning. GSSW student Jess Albright said that, “Watching all the cranes take flight was majestic and a reminder that I get to share a world with such wonder and beauty.” The cranes began calling at the break of dawn, beginning with soft vocalizations, then erupting into a vibrant cacophony of croaks, bugles and squawks. As MFJS student Kenzie Claflin put it, “The first time I heard it, it almost made me forget where I was or what I was supposed to be doing because I was in such awe.” Students also saw two whooping cranes that morning, a somber sight, considering that there are fewer than 1000 of these birds remaining in North America. 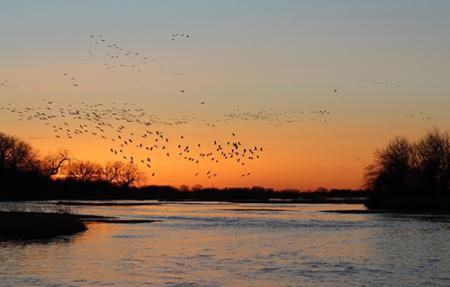 In the evenings, students observed the cranes return to their roosting grounds in the river, which was a highlight of the trip for film student Aaron Butwinick. “The lighting was beautiful, and the cranes came in at such a perfect time. The whole community was there, and I got to meet lots of locals and other out-of-staters like us.” The crane migration in Nebraska draws in a robust human migration of over 50,000 eco-tourists each year.

Social work students, noting the importance of community engagement in conservation mitigation, were surprised to learn that many Kearney residents were unaware of the crane migration. The Audubon Society seeks to change this by prioritizing outreach and education to elevate public commitment to wildlife protection. As Albright put it, this is a “reminder of the protections and compassion we are able to extend if we are aware of [the crane migration’s] importance and connection to the wider world.”

Students also noted disparity in access to wildlife and natural spaces. Social work student Lauren Manna observed that “there is a certain level of socioeconomic privilege implicit in the ability to take advantage of these opportunities.” Of note, Joe Brown will be exploring this topic further in an upcoming film on tree inequity in Denver.

MFJS students learned how to use equipment to film wildlife during this trip. Claflin expressed a need for being “adaptive and alert” to catch the right shot. The exact time and location where the cranes landed varied each night, thus they were challenging to anticipate. Butwinick echoed that the “animals might not be doing what you want them to be doing, so you need to be flexible.” Brown supported students by sharing his technical expertise and reminding them that, "Wildlife photography is never easy, but with 650K+ birds in a 70-mile stretch, you're bound to get some decent shots!" 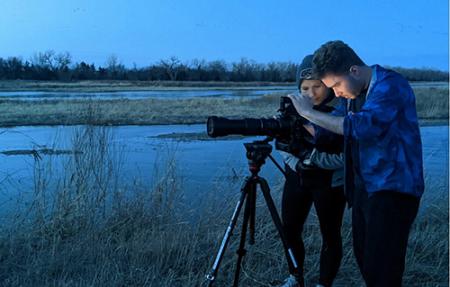 Ultimately, this trip reconnected students with nature and served as a powerful reminder of the value of species with whom we share the planet. An interdisciplinary group of students learned about the human dimensions of conservation and the technical aspects of wildlife filmmaking, and perhaps more importantly had the opportunity to directly experience something much bigger still. Film student Chloe Smith noted that, “After being in Denver for a few years, I forgot how much I value the connection to wild places and other species. I miss waking up to birds instead of traffic.”

Together, MFJS and IHAC will continue working towards improving living conditions for human and non-human animals. Professor Joe Brown has worked diligently to build an environmental documentary curriculum at MFJS. GSSW has been one of the first social work schools to acknowledge the risks that ecological degradation brings to the welfare and survival of human beings. A concentration in Ecological Justice, as well as a certificate in Human-Animal-Environment Interactions are now offered to Master of Social Work students to address these interdisciplinary challenges. Additionally, GSSW’s Institute for Human-Animal Connection offers students opportunities to engage in empirical research on animal-assisted interventions, human-animal-environment interactions, and OneHealth.

Stay tuned for the release of Cranes of the Equinox, and the next collaborative project between IHAC and MFJS, Rewilding Childhood: How Children Relate to Animals.