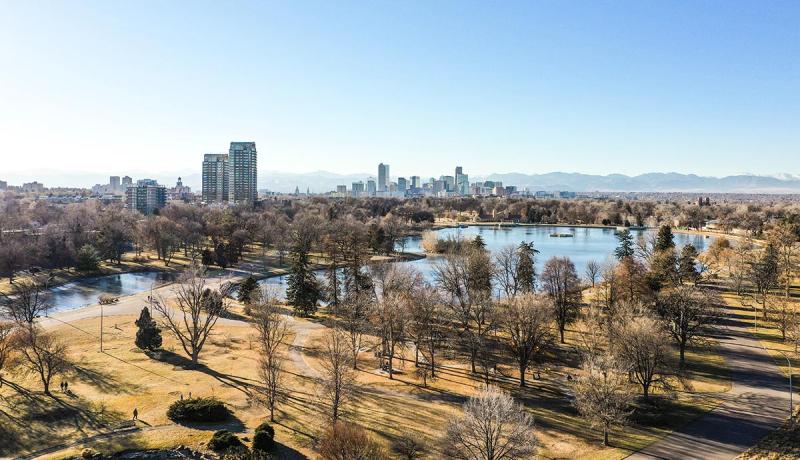 Joe Brown was a 25-year-old college student when he started following stories about fracking on Colorado’s Western Slope. Furious over the money spent on fossil fuels, he was determined to do something. So the activist shifted his focus and found his calling – documentary filmmaking.

“Some people say the truth is stranger than fiction,” says Brown, assistant professor of film, media and journalism studies at DU.

And in 2006, without available YouTube tutorials, Brown tapped experts at a Denver camera store. He bought his first camera – a $4,000 investment borrowed from his student loans. The sheer size of the Canon XL2, a fixture on Brown’s shoulders, gave him confidence to produce his first film, “National Sacrifice Zone: Colorado and the Cost of Energy Independence.”

“If you look at it, it’s not well done technically at all,” he says. “You’ve got to make a thousand mistakes. That’s just how you learn.”

Through trial, error and an MFA in film, he perfected his craft. Then he started teaching it, which ultimately led him to the University of Denver.

A similar pursuit of truth led to his current project, “Treeless,” a working title. With the help of a grant from The Nature Conservancy, Brown is examining tree inequity in Denver.

If you drive on Federal Boulevard, in the Sun Valley neighborhood, you’ll notice a lack of tree canopy. This section of the city, an area with 88% people of color, got a tree equity score of 29 from conservation organization American Forests. Just north, the Globeville and Elyria-Swansea neighborhoods, both with a majority of people of color, also have a low tree canopy – scoring 57 and 56, respectively.

Historically, Denver is a short-grass prairie. The urban forest in Denver is a result of human intervention.

“I’ve had the privilege of living in places that are pretty well treed,” says Brown. “I’m still curious. Why is it that certain neighborhoods seem to be overlooked?”

Part of the film’s goal is to reveal the history of unequal planning.

“It’s really not about villainizing anyone,” he says. “It’s just about trying to figure out how we got to where we’re at, and how do we move forward and make things better.”

Trees provide a certain aesthetic. But more important, they provide a measurable impact on the health and wellbeing of the community. Trees act as a natural air conditioner, reducing heat-related illnesses and utility costs. And as the world continues to warm, the difference is stark.

In the shade, Chris Hawkins, of The Nature Conservancy in Colorado, has recorded a 14- to 15-degree difference.

And while trees protect us from climate change, they provide social and economic benefits too – like wellness, a connected community, employment opportunities and increased property values. Denver’s urban forest provides $123 million worth of services and benefits each year, reports The Park People.

The Park People and The Nature Conservancy in Colorado are highlighted in the film as they work with communities and city leadership to create a more equitable tree canopy.

“The history of racist policies has left this really inequitable outcome on the landscape of our communities – significant disinvestment that impacts the health and livability of our neighborhoods,” says Kim Yuan-Farrell, executive director of The Park People. “There’s a lot we need to do to correct that.”

Interested in social problems, Brown is always looking for solutions. To him, the solution is somewhat simple.

“Let’s find a way to plant more trees. We’re facing a lot of huge challenges. There’s hope if we can motivate and do some of these things.”

Over the summer, students will help him finish the project. The 20-30-minute short film is set to release in 2023 – 16 years after the debut of his first film. And though his first camera is long gone, the lessons of the well-worn trophy will be passed down to documentarians to come.