Carving Your Own Path 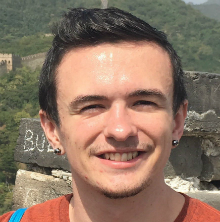 Matthew Kavorkian often jokes with others that he created his own major called "Chinese History." However, it's not much of a joke when you understand that Kavorkian has carved his own educational path, as he has combined many disciplines and techniques to gain a diversity of experiences in Beijing, Disneyland and at DU.

Kavorkian is double majoring in Chinese and History, which is fueled by his passion for Chinese society.

"As I am absolutely obsessed with the study of Chinese history and society, my two majors allow me to tackle the topics from a variety of different angles," he said.

It's only natural then that he decided to study abroad last fall in Beijing. There, Kavorkian was part of an intense language study program, where he was required to speak Chinese (Mandarin) Monday through Friday with no exceptions.

"The more complex language structures are completely different than English structures," he said. "Therefore, in many cases, I find myself not only having to rearrange words I know into a different order, but also ideas."

For Kavorkian, having to think differently by learning Chinese was just another way of gaining a broader understanding of the world. "Even to this day some phrases or words simply make more sense in Chinese than English," Kavorkian said.

Kavokian's two majors were not only enhanced, but bonded together when he was in Beijing. Many of the theories, events and ideas that he had learned or wrote about in the classroom setting came alive in real life experiences, completely changing their original meanings.

"Seeing that the Yuanmingyuan (old summer palace), Gugong (forbidden city) and Yonghegong (Yonghe temple) were actually real places and not simply words in a textbook really heightened my love and appreciation of China's long history," he said.

Along his own personalized path of bringing his passion for Chinese culture to life, Kavorkian got to walk the most famous path of them all, the Great Wall of China. "I actually thought that this experience would be rather cliché and too touristy for my liking; how cool could standing on a wall be? But once I stepped foot onto it, I immediately felt a sense of connection to hundreds of years of history."

China wasn't the last stop of Kavorkian's experiential journey last year. Right after he was done studying abroad, he began working at the Disney College Program in Anaheim, California. The program is a five-to seven-month immersive experience giving participants housing and varying jobs at Disney's parks and resorts.

"There are people there literally 24/7, inspecting the rides, hosing down the streets and scrubbing fences with toothbrushes, delivering thousands and thousands of servings of food, managing staff, rehearsing performances, etc.," said Kavorkian.

Kavorkian is intrigued by how Disney Parks can create narratives and immersive worlds around the viewers, as he said "the mere fact that you are able to simply walk from the Wild West to a Bavarian village and later to an outpost of the future in a few minutes and actually believe that you are really in each place is amazing."

At Disney, he gained much more respect for the old saying "it takes a village" as he witnessed the astounding collaborative effort it takes to create the sensations Disneyland provides.

"There is no substitution for hard work and incredible attention to detail when you want to create something that's out of this world," he said.

Coming back to DU, Kavorkian's made sure to apply everything he learned last year to enhance his education even further. "In my studies, I focus more now on looking at any issue from multiple angles so that I can get a better picture of the issue as a whole."

Kavorkian will continue to carve out his own path as he aspires to be a part of the Imagineering departments of Walt Disney Parks and Resorts.

"To be involved in the process of researching and developing Disney attractions and theme parks would be a dream come true!" he said. Till then, he will be studying, researching and maybe finding time to watch his favorite Disney movie, Aladdin.