Going Beyond the Classroom 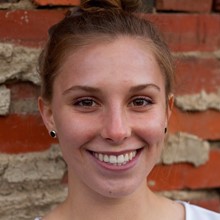 "My role as a student ambassador gave me an opportunity to show the United States and my home city of Austin, Texas, to amazingly bright and accomplished Saudi students, many of whom were years ahead of me in their academic work," said Hahn. The three-week program started and ended in Washington D.C., with one week in Austin for Hahn and her group.

SYLEP 2017 offered Hahn an opportunity to apply what she learned in her religious studies and international studies courses in a non-academic setting. Her interest in different cultural traditions and philosophy of religion can be traced back to one DU class.

"I completed a course in Islam with Professor Andrea Stanton, which piqued my interest in going beyond the classroom to understand and interact with people who practiced the tradition," she said.

Leadership is a requirement of entry into the SYLEP program. During her time at DU, Hahn has participated in a range of leadership positions, from working with students through the DU International Living and Learning Community, to assisting Colorado Rapids soccer player Axel Sjöberg at weekly scrimmages for students enrolled in Calico International, a non-profit organization that helps people from around the world assimilate to culture in the United States.

"At this stage of life, leadership to me is really about learning how to serve others well," she said.

Hahn has also volunteered as a Conversation Partner in the DU English Language Center and at two Denver non-profits: Denver Rescue Mission and Samaritan House.

Hahn believes her experience at SYLEP, combined with her leadership and volunteer work, has prepared her for the future.

"SYLEP gave me valuable insight into potential career opportunities. I think interning for a non-governmental organization like SYLEP was a great first exposure to the workforce," said Hahn, who is considering law school or working in the field of International Human Resources for a multinational company.