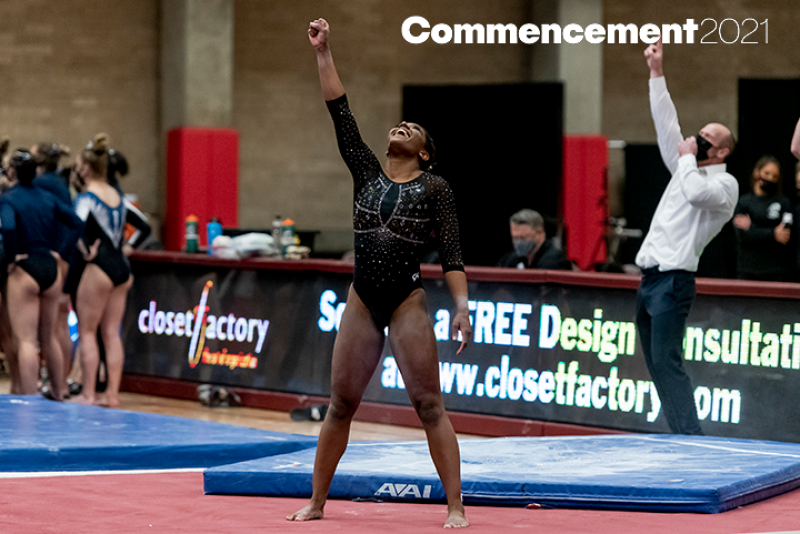 For Lynnzee Brown, the idea of going to college seemed out of reach. No one in her family had ever attended college, and she thought the many barriers on the road to admission would prevent her from being a first-generation student.

However, gymnastics would open the door to an opportunity she had never thought possible. Brown’s performance in the JO Nationals through her club team in Missouri attracted the attention of college programs across the country, including the University of Denver.

“I didn’t think I was going to be good enough academically or athletically, but the coaches here showed how much belief they had in me, which was very different than what I was used to coming from a club gym that produced Olympians,” Brown says. “I just knew that I would not find the same support that I have received at DU anywhere else, so I never visited another place after that.”

Once on campus, adjusting to college life brought plenty of challenges. Brown says she experienced a huge culture shock and struggled to adapt to the academic rigor of a university. Fortunately, her teammates stepped up, helping her cope not just with new surroundings and the demands of her media studies major, but also with competing in the gym.

“Higher education was definitely a hard adjustment, but even with gymnastics I had to learn to work as a team, and it wasn’t about me anymore,” Brown says. “I was no longer just doing it for myself; I was now doing it for a purpose because I loved the team.”

The team’s success has been Brown’s motivation over the past four years. Whether it’s setting personal or program records with her routines, winning an individual NCAA National Championship in 2019 or earning academic honors, she knows her achievements help fuel the success of the team and the program.

That is true now more than ever, as the senior captain leads the team into another postseason. Just recently, Brown helped the Pioneers achieve another first — a Big 12 gymnastics championship. Since joining the conference six years ago, DU had never defeated the University of Oklahoma. That changed on March 20 when Brown sealed the victory for Denver with a perfect 10.0 on bars, the team’s final routine in the championship. Brown’s all-around score of 39.725 made her the second Big 12 all-around champion in program history and helped her earn the Big 12 Conference co-Gymnast of the Year.

“Not very many people get to experience trying to be the best at something, and in our college careers we only get four years to do that,” Brown says. “This championship is for the people who have worked so hard to build the program to what it is today.”

Now the team begins the difficult journey of trying to return to the NCAA Team Championships, which begin this Friday with regionals. The top two teams in each region will advance to the championships in mid-April.

Once this season ends, Brown expects her gymnastics career to continue. Because the 2020 season came to an abrupt end due to the COVID-19 pandemic, she has the option to pursue a fifth year of eligibility. However, she is also interested in competing professionally and pursuing her dream of competing at the Olympics.

“When I was younger it was pretty much everyone’s dream to go to the Olympics, and I really wanted to do it, but I wasn’t quite there in 2016,” Brown says. “Now I’m at the point where my gymnastics has only gotten exponentially better since coming to college, and I’m just curious how much better it can get.”

While competing for Team U.S.A. would be an enticing option, Brown is also drawn to her heritage and would love to pursue a dual citizenship from her father’s home country of Haiti. Although the island country does not have a gymnastics team or a training program in the U.S., she views this as an opportunity to create something new before the 2024 Paris Olympics.

“My mother passed away two years ago, and it was always her dream for me to go to the Olympics,” Brown says. “She got to watch me in 2019 win my national championship. I think this would be for her, and it’s one of my main motivators right now, just to do all of the things she wanted me to do and be successful.”

Plans for commencement for the Class of 2021 are underway. We are extremely proud of our 2021 graduates and are looking forward to providing commencement information as soon as possible.