The Impact of an Internship 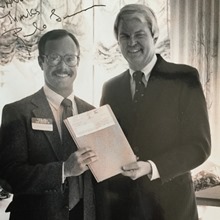 As Clem's surviving partner, Douglas Tippin carried out his wishes. Julia Dacy received the first internship award. The senior strategic communication major utilized her award for an unpaid internship last summer in her hometown of Chicago.

Since internships are required for strategic communication majors within MFJS, many students find themselves unsure how to afford an unpaid, credited internship. However, the MFJS department and Lance C. Clem Endowment for Media, Film, and Journalism Studies met that need for Dacy by funding the credit and tuition costs of her internship. The legacy of Lance Clem continues to impact DU students by offering them real-world opportunities to expand their education.

"I would not have been able to accept this internship opportunity without the Clem fund," said Dacy, "and I never would have gained the first-hand experience that I did without it."

As the first Clem intern, Dacy was able to further her studies and accept an unpaid internship in Chicago with her high school alma mater's District Community Engagement Office. With a small office of only one employee, the office utilized Dacy's assistance in their media relations department to write blog posts, run the district's Instagram and Twitter accounts, update the content calendar for the summer and school year, pitch stories to media outlets, serve as the point of contact for the district publications, and interact with various local media outlets. The hands-on experience allowed Dacy to take on bigger projects as an intern doing vital work for her local community.

"My education really came full circle as I was able to return to the high school where it all began and reflect on my education as a senior in college," said Dacy.

Lance Clem (BA '72, mass communications) was a longtime spokesman for the Colorado Department of Public Safety. He was active in Democratic politics and a poll watcher for many years with Governors Richard Lamm and Roy Romer.

"Government is held together by dedicated public servants like Lance Clem. Lance served Colorado, quietly, but with great dedication and loyalty for many years. He left us too early," said Gov. Lamm.