Leading the Way in Gender Studies 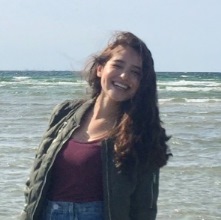 Innovation at the University of Denver is highly encouraged. When Rebecca Alfaro (BA '18, gender and women's studies, international studies) had the opportunity to be the first student in the DU and Lund University (Lund, Sweden) 3+1+1 program in gender studies, she jumped at the chance.

Alfaro recently completed the 3+1 part of the program, three years at DU plus one year at Lund, to earn a bachelor's degree. This fall, she starts her final year at Lund to earn a master's in gender studies. "It's been a wonderful experience and opportunity that I will always be grateful for," she said.

Since arriving at Lund, Alfaro became involved in Projekt Sex (P6), a student-led organization that strives to educate and spread safe sex and LGBTQ+ awareness to all Lund University students.

Alfaro is passionate about human rights, specifically education and the obstacles impacting young girls from different countries. Since high school, she has volunteered for the United Nations Girl Up campaign, a global leadership development initiative positioning girls to be leaders in the movement for gender equality. Her time at DU allowed her to continue that interest and cultivate others.

"DU gave me the opportunity to broaden my understanding and passions for human rights and social justice," she said. "I've since continued my focus on gender rights, but have also broadened my passions to racial issues, specifically Latina/Hispanic issues given my ethnic identity as a Chicana."

Alfaro draws inspiration from the strong women in her life, particularly her mother and others in the community.

"I am a first-generation Chicana given that both of my parents immigrated to the U.S. as children, and later received their citizenship," said Alfaro. "My mother comes from a struggling working-class background that limited the opportunities she had as a child and young woman. She learned from a young age how important an education was to lifting her abilities, opportunities and overall livelihood. She followed her dream to be economically independent and secure by graduating from high school, gaining her bachelor's and, soon to be, master's degrees."

"My mother's life and the life I have known to be my childhood would not be the same without her fierce passion for education," she added. "I will always be thankful for the Chicana upbringing I received, and the deep passion for education that was instilled within me."

Alfaro's most recent achievements include an Adell and Hancock scholarship award from the Institute of International Education through DU which she will use to take Swedish language courses in Sweden. She was also awarded an internship with The Denver Foundation within the Nonprofit Internship Program (NPIP). Through NPIP, she worked as a communications intern at The Women's Foundation of Colorado, a community that works to advance and accelerate economic opportunities for Colorado women.

After Alfaro completes the master's program at Lund, she hopes to work for the United Nations Girl Up campaign, or another related gender campaign.

"I want to make a difference in the lives of young girls and women," she said. "I struggled as a young girl with finding my voice and reason, and want to help others realize their true potential and intelligence."