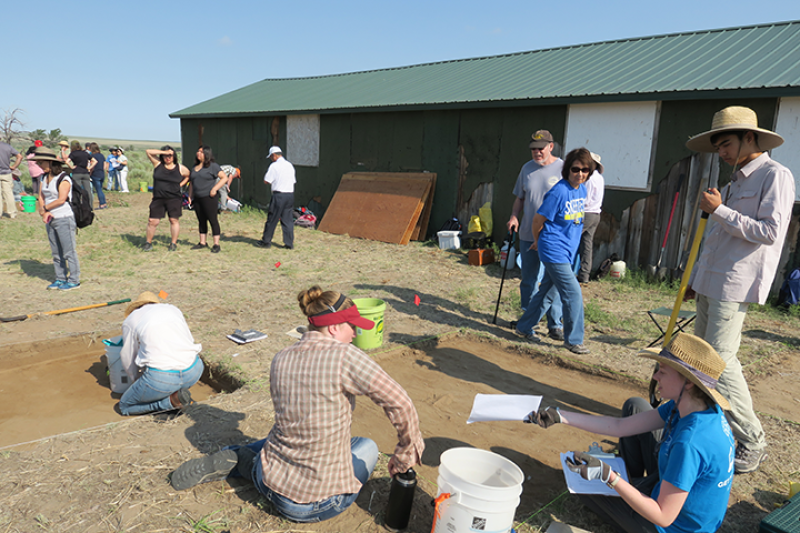 Archaeology in action at Amache.

A new crown jewel was added to the National Park System when President Joe Biden signed the Amache National Historic Site Act into law on March 18. Amache, also known as the Granada Relocation Center, was a World War II internment camp for Japanese Americans located near Granada, Colorado. Under the new law, the National Park System will “preserve, protect, and interpret for the benefit of present and future generations resources associated with the incarceration of civilians of Japanese ancestry during World War II at Amache.”

Professor Bonnie Clark from the Department of Anthropology has operated a University of Denver archaeology and collections field school at Amache since 2008. She talks about Amache’s new National Historic Site designation in this interview with the DU Newsroom.

President Biden signed the Amache National Historic Site Act into law on March 18. What was your involvement with the Act?

The work of the DU Amache Project supported the passage of the act in a number of ways. First, we have been gathering data about the significant archaeological resources at Amache since 2008. Our findings helped support the case for Amache's addition to the National Park System by highlighting just how valuable and extensive those resources are. Secondly, as collaborative research, we've helped to create connections that make for good advocacy. Both in the field and in the museum, we bring people together across generations and different regional and cultural backgrounds who share a commitment to preserving this place. Finally, the faculty, staff, students, and alumni of the project answered the call of different groups to contribute to public dialogue about the site and the legislation to protect it.

How does this designation differ from the previous Amache National Historic Landmark?

National Historic Landmark status identifies a site as nationally important and provides some benefits to site owners, but it doesn't mean they are federally managed. Amache has been an NHL since 2006, but was still owned by the town [Granada, Colorado] and managed by a small volunteer organization. As a National Historic Site, Amache will be owned and managed by the National Park Service (NPS) which will have staff to maintain and interpret the site.

What does this designation mean for the future of Amache?

Most importantly, the NPS must manage sites with an eye to the long term — its resources must be preserved in perpetuity. However, transition to National Park Service ownership and management will take time, so for a while, things on site and in the Amache Museum won't look very different. But over time as the NPS puts in place a management and interpretive plan, you'll likely see rangers interacting with site visitors and the construction of a visitor center.

Will this have any impact on your ongoing research?

The NPS has an unfunded mandate for complete archaeological surveys of all of their properties, so our work will actually help the park in its mission. Because we come with expertise and grant funding, it's likely we will continue to be welcome to continue our field schools. Of course, we'll need to consult with the NPS to make sure we have their permission and follow their policies.

After a two-year hiatus due to COVID-19, the University of Denver Amache Field School will resume this summer. What will your crews be working on?

We are planning to survey the block where the high school was located. That's a really important spot for the Amache survivor community and we look forward to sharing our results with them in a community open house. We'll also be excavating a mess hall garden for the first time. We hope that the intensive garden archaeology techniques we've developed will be a model that the park can follow if they develop that or other gardens on the site.