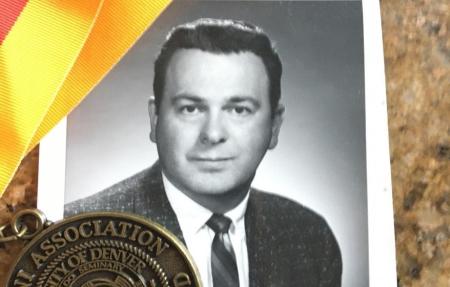 Stewart “Lloyd” Bowen (1922-2020) had a long and varied musical career, he performed with many notable musicians including Bunny Berigan, Arnold Fishkind, Vern Byers, Jack Teagarten, Stan Kenton and many Denver musicians. Lloyd received his BA from the University of Denver in 1952 and master’s degree from the University of Northern Colorado. He taught at several Denver parochial schools, Jefferson County schools and Regis College, all while continuing to perform at many musical gigs around Denver. Lloyd was the proverbial “Music Man,” leading many bands including the Highlander Boys, Junior Police, VFW, American Legion, Shriner’s and his own Big Band “Nostalgia.” As a retired army veteran of WWII, Lloyd provided closure to many military families by playing Taps at funerals. He was a proud patriot, member of the Sons of the American Revolution and conducted the Colorado National Guard Band for many years.

Lloyd received the Alumni Association Pioneer Legend medal in 2002 from DU and he was also honored with the Service Recognition award from the Denver Musicians Association. Lloyd was an inspiration to hundreds, if not thousands, of people with his wealth of experience and his generous nature.

Stewart died in December 2020 and his family generously gave DU the “Big Band” orchestration and many boxes of music books.

Lloyd’s daughter Margaret Bowen Johnson attended DU from 1968 to 1971 and worked for DU Alumni Relations under Jack Mummy and Mary Christine Smith.  Margaret, along with siblings, Tom Bowen and Janet Palmquist wanted this donation to DU to honor the memory of their much loved and respected father. Lamont is grateful for Lloyd’s family’s donation and is proud of his long and distinguished musical career.