More than 70 veterans’ stories are featured as the project expands 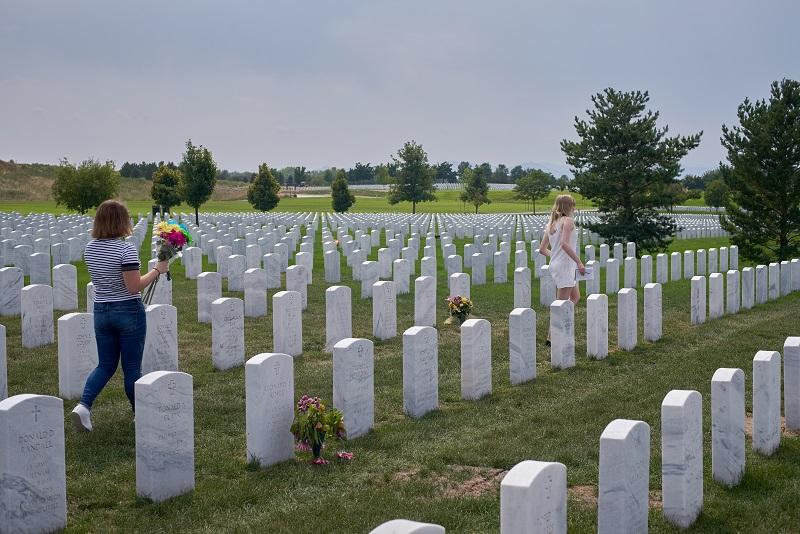 Monica Kleyman and Chloe Allison walk through Fort Logan National Cemetery in 2018 as part of the inaugural cohort of the Veterans Legacy Program. (Photo: Michael Furman)

Lexie Graham has never met the woman whose photo hangs on her refrigerator. In fact, until this year, Graham, who graduated last winter with a history degree, didn’t know that Loxie Dowdy so much as existed.

And yet, through her work in the University of Denver’s Veterans Legacy Program (VLP), Graham feels like they’ve known each other for years. She knows about Dowdy’s upbringing as one of 10 children during the Great Depression, the way she fought a boy who pulled her hair in grade school, and her deep love for her longtime partner and wife. That’s not to mention her years of service in the U.S. Air Force — the reason she is buried at Fort Logan National Cemetery in Denver and the reason Graham got to hear her story in the first place.

“The stories that we’re telling in VLP are not the stories that are normally told about the military,” says Graham, whose research highlighted women — and, in this case, members of the LGBTQ community — who served. “I think that’s what the experience of VLP is: It really brings those veterans alive.”

Since its inception in 2018, DU’s VLP has commemorated more than 70 veterans buried at Fort Logan in its “More Than a Headstone” (MTAH) project. It’s a number that is sure to keep growing: A new grant will keep the program going for a third year and allow the VLP to expand its outreach.

The newest component of the VLP is a website, featuring virtual and self-guided tours alongside a growing roster of biographies and photos. A soon-to-be-released mobile app will showcase the students’ work on yet another platform.

The content comes from several cohorts of students who, each quarter, comb through a spreadsheet containing thousands of names before selecting a few to research and profile.

The students behind the research rarely have much exposure to veterans and the military lifestyle. In many cases, the stories they write belong to veterans from marginalized and underrepresented populations, including women, minorities or foreign-born citizens.

“Ultimately that means we’re telling a more nuanced and accurate and complete history of the United States,” says Elizabeth Escobedo, an associate professor in the Department of History at the College of Arts, Humanities and Social Sciences. “It allows for a wide array of community members to find themselves and their families in these narratives, on the hallowed grounds and shared community space of Fort Logan National Cemetery, but also within our larger national story.”

DU’s role in telling that story has only expanded since the National Cemetery Administration first asked Escobedo and Department of History chair Carol Helstosky to take part in the nationwide initiative in 2018. After the pair teamed with DU Libraries to stage an exhibit at Anderson Academic Commons, TEDx Mile High Adventures approached her about coordinating a tour of Fort Logan, led by DU students. Sixty people showed up and the event sparked the new, digital direction for the project.

“A website allows us to reach communities at the local, state and regional levels and give people access to this research,” says Esteban Gómez, an assistant professor in the Department of Anthropology who worked to get the MTAH online. “It can do a lot to communicate the work faculty and students are doing and really try to establish connections with multiple communities.”

This is the heart of the VLP — its ability to create dialogue across generations and populations. In some cases, that means DU students are working with grade school students, designing curricula to be used in their social studies classrooms in tandem with the MTAH site. In others, it means participation in A Community Table, a program sponsored by DU Grand Challenges and the Center for Community Engagement to advance Scholarship and Learning. Veterans from five different conflicts gathered virtually via Zoom to discuss their experiences and address issues facing their communities. It was an opportunity, too, for veterans to get a glimpse of the work DU is doing.

Above all, that work creates interaction with and lessons from prior generations. Since the veterans profiled are no longer alive to tell their stories, VLP members must track down spouses, siblings, children or friends to get the full picture.

In Graham’s case, that meant driving to Fort Collins to meet with Loxie Dowdy’s partner of 45 years, Lucy Laugesen. Laugesen welcomed Graham with coffee and pastries, and they chatted for hours about Dowdy’s life. Graham left with a few of Dowdy’s belongings: a plaque, an angel statuette and the photograph that sits on her refrigerator. She drove home in tears.

“It was such a special experience for me,” she says. “I didn’t really grow up being around my grandparents. Now I have this woman in my life that I remain in contact with. I think that speaks not only to the power of storytelling, but the power of being able to sit down and have a conversation with someone you have nothing in common with.”

In addition to profiling a pair of female veterans, Graham has also spearheaded a new suite of social media accounts for the project, on Facebook, Twitter and Instagram. The accessibility of the VLP and its MTAH site to non-academics is part of what Graham says makes the project so special.

“If this research were published in a scholarly journal, no one would be reading it,” she says. “What’s cool about this is that I can share this with my parents and share it with my friends and tell them this is the research I’ve done over the summer. People who aren’t in academia or aren’t plugged in to the military can read this information and connect with their stories. I think it’s our job as historians and as community members to acknowledge that segment of the population.”