A Writer's Experience in the Game World 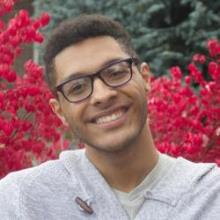 As a first-generation college student, Sherlock Crockett was uneasy about higher education and the related costs. Now into his third year at DU, and after receiving several AHSS scholarships for outstanding academic performance, Crockett is feeling much more confident than he did as an incoming first-year student.

Crockett had no idea he would go on to receive the Bryn Sara Linkow Scholarship, the Trerotola Endowed Scholarship, the Michael G. & Kathlien E. Massey Endowed Scholarship, and the AHSS Deatt Hudson Scholarship for English majors. Over the course of his academic career, he has proven to himself, his professors, and even the video game world that he has what it takes to not only succeed, but thrive and make meaningful contributions inside and outside the classroom.

In addition to English creative writing, Crockett chose to major in emergent digital practices (EDP), "because I came to a realization that playing video games, writing, and reading were no longer simply hobbies for me but passions." After reading a book about game writing, Slay the Dragon: Writing Great Games, by Robert Denton Bryant and Keith Giglio, he began to consider it as a career option.

"After reading that book, I started analyzing my interest in and interactions with video games. After that, I was resolved to add EDP on as a major in order to learn more about games and the technology that goes into games," he said.

One of Crockett's favorite projects thus far at DU has been a blog post that combines all of his passions into one. Crockett was assigned an analysis of a vintage video game, [domestic], created by game designer Mary Flanagan. The game was so old that modern computers can no longer run it, so Crockett had to make due with previous research on the game. Crockett came to be interested in the feminist past of Flanagan and her work; therefore, he looked more closely at the discourse of the game. The best part came after the completion of the project.

"My professor, Christopher Coleman, shouted me out on his Twitter and the EDP department's official Twitter, and Mary Flanagan herself both liked and commented on my post! She said I had a 'great analysis,' and I still can't stop thinking about how wonderful that is," he said.

Other than academics, Crockett's activist work with the Black Student Alliance (BSA) and the Queer Student Alliance has rounded out his time at DU. As secretary of the BSA last year, he was responsible for releasing a statement to the DU community on the campus climate surrounding racism. He supported and helped those responsible for running the group, from attending a Black Out student protest to broadcasting on the Free Speech Wall.

Following graduation, Crockett hopes to attend graduate school out-of-state. His dream job is being a game writer, so he is looking into programs of either creative writing or game design. One aspect of his future that Crockett is sure about, however, is continuing his activist work.

"I'd love to keep working to foster an equitable position for marginalized people in society," he said. "Whether it be through community building, writing diverse stories or my own stories, I want to continue giving back to communities that have had so much taken from them."