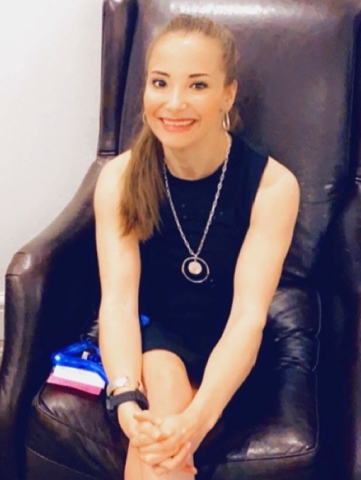 When Kenzie Maher and her dad first toured the University of Denver campus, the Evans crosswalk gave him pause. He was terrified of the idea of her crossing there every day, says Maher who has cerebral palsy. But her reaction was altogether different. “I remember having this feeling right away like that was home.”

Once Maher set her mind and goals on DU, the Colorado Springs native never looked back. She will graduate in June from the Department of Psychology’s 4+1 program, having earned both a bachelor’s and a master’s degree in psychology in just five years. Upon graduation, Maher’s academic credentials will include BAs in psychology and English, a minor in biology with a concentration in cognitive neuroscience, and an MA in psychology.

Maher was drawn to DU’s psychology program, specifically the cognitive neuroscience concentration, to better understand how the brain works. Five years later, she has been accepted to Colorado State University’s developmental science PhD program where she hopes to work with families of children with disabilities from underprivileged communities.

“I am only where I am today because I grew up in a stable household,” says Maher, who was diagnosed at birth with a severe form of cerebral palsy. Her father became the sole breadwinner while her mother devoted her time to Maher’s physical therapy and home schooling. Her parents were able to provide constant love and attention, she says, and she knows how rare that is.

“In a lot of families with disabled children…mom and dad can’t work with the kid because they’re trying to put food on the table. So the question becomes, how can we give everybody similar opportunities like I had? Those opportunities should be available whether you are financially stable or not,” Maher says.

Growing up in a world of endless therapy appointments and doctor’s appointments, Maher realized that treatment was very standardized.

“I want to see if I can make [treatment] less focused on the diagnosis and more appropriately targeted toward the individual and his or her need, so we can cut down on time and get the maximum benefit, therapy-wise,” she says.

“Getting a PhD in developmental science, I would have the opportunity to learn more about the ways typical and non-typical children develop and really to pinpoint the problems and how to help fix those problems,” says Maher, who hopes to have her own research lab someday where she can work with disabled children and their families.

Maher’s DU education has been a springboard not only for a career but for life.

But it’s not all work and no play, according to Maher. The small class size allows her to have one-on-one relationships with her professors, whom she describes as being very supportive. “It feels like they care for you and they want you to do your best,” she says.

“I feel like learning some of those values, always trying to do your best, is what is going to carry me through my career and the rest of my life no matter where I end up,” she adds.

Jena Doom, assistant professor of psychology, is Maher’s master’s program faculty mentor and one of her biggest supporters.

“Kenzie has not only excelled in the classroom, but she's sought out research experiences in multiple psychology labs to gain skills needed to achieve her career goals,” says Doom. Maher received the psychology department’s Elsie Lincoln Vandergrift Scholarship, which recognizes the top undergraduate student in terms of research potential.

As a master’s student, Maher’s research looked at how socio-economic status and family environment affected the physical and mental health of adolescents during the COVID-19 lockdown. Surveys were sent to several high schools across the Denver area in May 2020. Students were asked about academic work, social life, physical activity and sleep. Maher collected data on how the kids were being affected during that timeframe, specifically looking at depressive symptoms and change in physical activity.

“We discovered that having a supportive family environment was able to both reduce COVID-related stress and depressive symptoms in adolescents,” says Maher. “Adolescents who have strong emotional support while they were going through this… overall had better emotional well-being.”

With graduation on the horizon, Maher looks back fondly on her time at DU.

“I am definitely someone different now than I was as a graduating high school senior thinking that I knew it all. I am the person I am today because I chose to go to DU and I am so happy I made that decision,” she says.

Her mentor Jena Doom sees a bright future for her student.

“[Kenzie] is an intellectually rigorous, passionate student who will make transformative contributions to our understanding of how neuroscience and psychology intersect with disability to ultimately improve the lives of individuals with disabilities,” says Doom. “She is certainly one of the top students I have ever mentored. I can't wait to follow her career and see all that she achieves!”