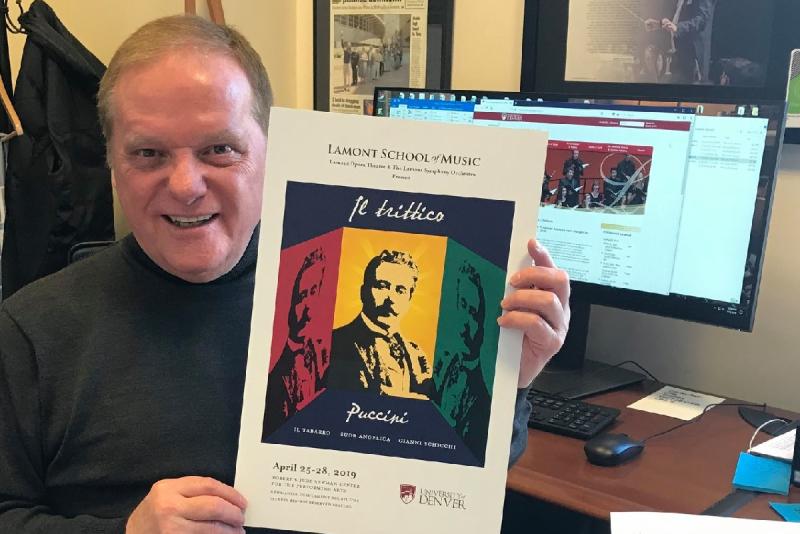 Lamont saw many retirements in this past academic year. We gave best wishes to a number of faculty and staff who helped make Lamont what it is. Chris Wiger, Manager of Public Relations, was one of them, one whose presence was large. It seems only fitting that we feature him in a publication he helped build.

Before coming to the University of Denver, Chris enjoyed a long career in the industry and, along the way, a fair share of accolades. When performing in the United States Air Force Academy Band (French horn), he was the Academy’s Non-Commissioned Officer of the Year for one year. Working as an entertainment supervisor at Walt Disney World for 15 years, he hosted nearly 400 celebrities. He was working for the Colorado Avalanche when the NHL team won its first Stanley Cup, and he helped the Denver Center Theater Company win and announce a Tony Award while premiering more than 30 new plays and musicals.

His time at Lamont was everything he had hoped it would be. “I wanted to work with the next generation of performers and getting to know them was something special,” he recalled. “There was always something to look forward to the next year.” He was a ubiquitous presence; one could expect Chris to appear throughout the day at Lamont in various roles. He could be found posting notices in Joy Burns Plaza, handing out programs at Convocation, welcoming prospective faculty or parents of prospective students, assisting in a reception he helped arrange, taking care of a patron’s special needs that only he knew how to address, riding on the bus during a student ensemble tour, or taking care of arrangements when the ensemble reached its next destination. He was deeply involved in the Lamont community, from new students to longstanding donors and everyone in between. From recent years he remembers in particular covering alumna Sarah Cambidge’s Metropolitan Opera debut and the Lamont Jazz Orchestra performing at the Monterey Jazz Festival in California.

Chris had a profound presence during his ten years at Lamont. One could say that his years of experience in the hospitality industry (with Walt Disney, for example) trained him to be a gracious host, a person who took care of others, and someone with an uncanny ability to remember people. That, however, would be only part of the picture; it would overlook Chris’s nature as a people person, someone who by nature looks after others, who takes care to make sure people are cared for. One also saw his mark on our many publications that he oversaw: our website, Facebook posts, annual brochures and mailers, posters, fliers, tour programs, and here, with Lamont Lyrics.

When asked about his legacy, Chris said, “I would hope people would remember me as going the extra mile, not just doing the job but trying to do it especially well and being involved with more than my job really entailed.” We do, Chris. We thank you for all you gave and for the model you provided of going the extra mile. While we miss you, we wish you nothing but the best in your well-earned retirement.