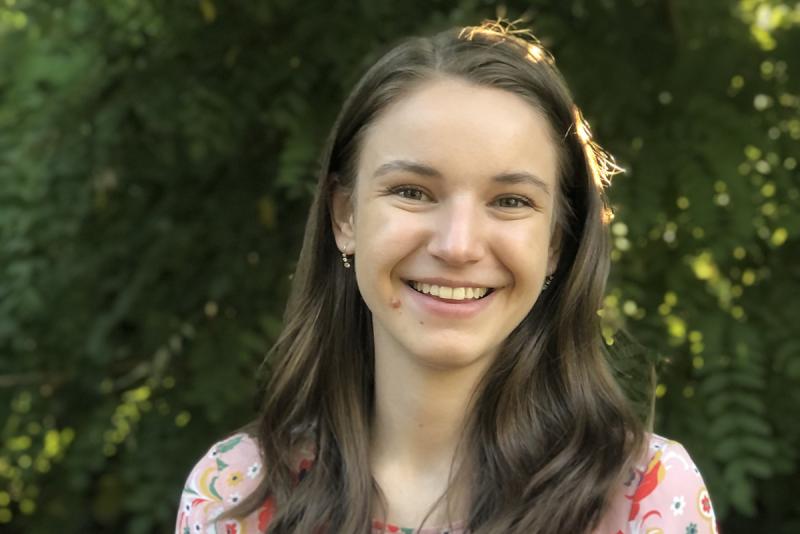 Maeve Nagel-Frazel (BA ’22), a violin student from Portland, Oregon, is not easily pigeonholed. She started as a performance major but is due to graduate as a music major with a history minor; she often sings with the Lamont Chorale, but she has also joined them as an instrumentalist; and her most remarkable contributions to the field are not in performance, but in musicological scholarship. It was the uncommon strength of this scholarly work that led to her winning Lamont’s most coveted prize this spring: the Presser Undergraduate Scholar Award, which comes with $4000 in professional development funds.

According to Jack Sheinbaum, a professor of musicology at Lamont, “Maeve’s musicological work is, frankly, off the charts for an undergraduate student.” Nagel-Frazel has focused primarily on turn-of-the-20th-century figures such as Emma Azalia Hackley, a singer who was the first Black graduate of DU, and Camilla Urso, a French violinist who was the first nationally famous female violinist in America. “The musicology faculty have been very helpful to me; they’ve been great mentors,” said Nagel-Frazel.

Using a novel approach, the young researcher makes digital maps out of humanistic data and cultural histories. These maps comprise data “from newspaper records, city directories, performance programs, home addresses, performance locations, and the like,” she explained. When I asked if there was a well-established process in place to create such documents, she offered, “I actually wrote a digital textbook on how to create digital, musicological maps.”

Nagel-Frazel has presented her paper on Urso at more than half a dozen musicological conferences, where it met with astonishing success. She won the prize for best student paper at the regional American Musicological Society meeting in 2021 and was honored with the prestigious Mark Tucker Award for best student paper at the 2022 meeting of the Society for American Music, prizes typically awarded to doctoral students. As Sheinbaum succinctly put it, “These achievements likely have never been accomplished by an undergraduate before.” The paper was published in the DU Undergraduate Research Journal in 2021.

This summer has been productive for the scholar. Nagel-Frazel joined Prof. Louis Epstein and four other students at St. Olaf College as part of the Musical Geography Project. They have been examining early graduates of the Washington Conservatory of Music in Washington, D.C., the first American music conservatory founded and run by Black classical musicians. A Summer Research Grant from DU helped to fund the trip to Minnesota; some of the Presser funds have already supported archival research at Howard University, the Library of Congress, and the Anacostia Community Museum in Washington. Nagel-Frazel’s digital exhibit from this project is available on the Musical Geography Project website.

As for the future, the senior is cagey. She has an article that has “passed review – it’s a long process,” she said, for a leading musicological journal. Based on this summer’s work, she plans to co-write an article with Epstein for “possible publication” in 2024. What about after DU? Nagel-Frazel suggested, almost as if it were unexpected, “I may go to grad school for musicology or history.” She isn’t sure yet. Whatever she decides, the Lamont community is surely proud to have her among its ranks.