The Spirituals Project is a Community Organization

dedicated to preserving and revitalizing the spirituals, through musical, educational, and social justice work in our community. Our work centers around a community choir open to all.

is to preserve and revitalize the music and teachings of the sacred songs called “spirituals,” created and first sung by enslaved Africans in America in the 18th and 19th centuries. Spirituals uplift in times of crisis, heal, comfort, inspire and instill hopes and dreams, thereby transforming individuals, communities, and whole societies. Our goal is to ensure that the spirituals will be passed on for many generations to come.

A past recipient of the Denver Mayor's Award for Excellence in the Arts, the organization has presented a wide variety of musical and educational programs over the years, including a national conference on spirituals in 2013 featuring poet Nikki Giovanni as keynote speaker, and a historic concert in 2009 at Denver’s Ellie Caulkins Opera House in honor of Dr. Martin Luther King, Jr.’s 80th birthday featuring the renowned mezzo soprano Denyce Graves as guest artist. In the fall of 2018 the choir returned to the Ellie Caulkins Opera House to perform with international opera star Kathleen Battle.

We welcome people of all ages, backgrounds, and abilities to join our community choir. You do not need to be able to read music or have had any formal musical training to participate in The Spirituals Project Choir. Please join us. For more information about the organization, or to audition and join the choir, please email The Spirituals Project Director, M. Roger Holland at roger.holland@du.edu.

We are thrilled to announce the return of The Spirituals Project National Conference. Initially planned for 2020 and postponed due to COVID-19, the conference will be hosted by the University of Denver and feature an exciting line-up of guest speakers, breakout sessions, and performances.

Please visit the conference page for details and the link to register.

As The Spirituals Project celebrates its 25th Anniversary and moves toward hosting a national conference on the theme of “Healing,” we are proud to feature local artists Spirit of Grace on this program. Spirit of Grace has collaborated with such artists as Yoyo Ma, Justin Timberlake, The Flobots, the Colorado Symphony, and rapper Common. Together we will present spirituals and gospel music that is sure to be healing for the spirit and the soul.

Documentary: "I Can Tell the World"

Explore the work of the Spirituals Project and the history of the spirituals tradition in this 2008 public television documentary, co-directed and produced by Larry Bograd and Coleen Hubbard. 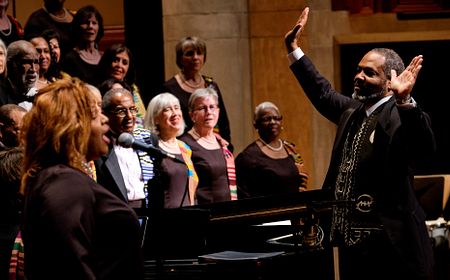 Give to the Spirituals Project

Support our performances, seminars and conferences.