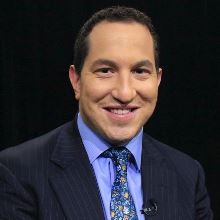 You're invited to the University of Denver's Estlow Center for Journalism and New Media's 26th Anvil of Freedom lecture by PBS host and civic educator Alexander Heffner. Heffner's keynote lecture, "Civil Discourse in an Uncivil Age: The Quest for a Post-Partisan Citizenship," will be held on Monday, October 1, from 2:00 – 4:00 p.m. at the University of Denver's Anderson Academic Commons. He will discuss the divisiveness of contemporary politics and how citizens and the press can restore faith in American civic life. This event is free and open to the public. RSVP online or call Emily Kintigh at 303-871-2166.

Heffner is host of "The Open Mind" on PBS. He has covered American politics, civic life, and Millennials since the 2008 presidential campaign. His work has been profiled in The Washington Post, New York Times, Los Angeles Times, Des Moines Register, Christian Science Monitor, Variety, Medium, and on NBC News, MSNBC, C-SPAN, NPR, CNN and BBC, among other media outlets. His writing has appeared in TIME, USA TODAY, Daily Beast, Reuters, RealClearPolitics, NYT's Room for Debate, The Wall Street Journal, Boston Globe, and Philadelphia Inquirer, among other publications. He is co-author of A Documentary History of the United States (Penguin, 2018).

The Edward W. and Charlotte A. Estlow International Center for Journalism and New Media seeks to explore the ways in which the traditional roles of journalism — information-sharing, knowledge-gathering, serving as a watchdog on power, providing the means for democratic participation in collective life and promoting public good — are finding new forms of expression and experimentation in the online digital environment. It does this by hosting events and seeking external funding for the sponsorship of research projects, both of which provide the means to bring researchers, professionals and students together for learning opportunities. It had its beginnings in the early 1980s, when DU alumnus Edward W. Estlow, a journalist for the Rocky Mountain News who eventually became president and CEO of the E.W. Scripps Co., first joined the DU Board of Trustees. An endowment at the University was established upon his retirement in 1986. Thanks to this fund, the University was able to welcome its first Edward W. Estlow lecturer during the 1992-93 academic year. In 1997, the Anvil of Freedom Award was established to recognize the Estlow lecturer's leadership and commitment to the First Amendment, and the two events were combined.

Event parking is available in a covered lot at the southeastern corner of the E. Evans Ave. and S. High St. intersection. Contact us at 303-871-2166 for information about handicapped accessible parking.