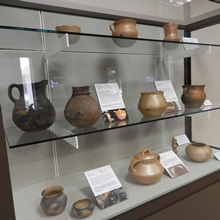 Madison Sussmann, anthropology graduate student, was going through a donation of Southwest pottery when four plain, shiny pots caught her eye. Realizing the glittering micaceous clay pots were not archaeological, but definitely unusual, Sussmann did a little digging.

"I discovered they exist in a complicated realm of being both too utilitarian as well as an art form in which potters dedicate their lives," Sussmann said of the pottery, donated by the family of DU alumna Allene Mueldener, who earned a master's degree in anthropology with a focus on Southwest pottery.

"The technique and form have remained the same for over 700 years, and I believed that their story of endurance and deep familial connection needed to be told."

Sussmann curated an exhibit which is now on display on the second floor of Sturm Hall. The exhibit, containing clay pots from the Picuris and Taos Pueblos, places the young next to the old and the art pieces next to the cookware to illustrate the art form through time and social significance.

Micaceous clay sparkles because it contains high levels of mica, a shiny silicate mineral with a layered structure.