Alumna Learned Early to "Lean In" 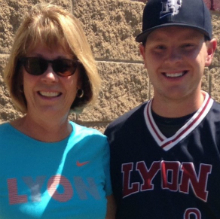 Six months after graduating from DU, Sharon Orlopp received a call that would change the course of her life and career.

Working in a local nonprofit at the time, she knew it wasn't the job for her, but didn't know how to change jobs and was scared to make a move in a bad economy.

When the phone rang, she was not expecting to hear from DU Career Services. Her former advisor had come across a free career symposium for retailers and immediately thought of her. With a little encouragement, Orlopp (BA '81, speech communication and political science) decided to attend.

There were dozens of employers, from big box stores to specialty retailers. The work environment would be a big change—fast paced and competitive with opportunities to travel or relocate. Orlopp said, "it spoke to my soul."

Fast forward 37 years, Orlopp has "leaned in" to every opportunity that has come her way. She worked her way up through the Woolworth company, from assistant manager at Susie's Casuals to vice president of human resources at Footlocker. She has worked for the largest employer in the world—Walmart, has co-authored a book, and is now taking on a new challenge with the blockchain technology start-up Core Scientific.

"There are rare moments in life where a window of opportunity opens and it's best to jump in with both feet," she said.

Making multiple lateral moves early on in her career at Footlocker equipped her with practical experience in every area of human resources and prepared her to step into a leadership role when the opportunity came.

Orlopp said her strong speaking and writing skills, combined with a curiosity to always ask questions and mindfulness to listen for answers, have helped her in teaching, mentoring, and developing people.

She credits her own supervisor at Footlocker, John Kozlowski, with taking a chance on her and giving her the opportunity and support she needed to grow and succeed.

"He was always a huge supporter, offering mentorship and guidance," said Orlopp. "I thrived because he pushed me to do even more than I thought I could."

Kozlowski believed in her even when she faced the biggest challenge of her life, she said.

In December 1993, while working at Footlocker, Orlopp was hospitalized 10 weeks before she was due to give birth to her first child. She was diagnosed with HELLP Syndrome, a rare disorder that disrupts the functions of the liver and blood. The life-threatening condition affects fewer than one percent of pregnant women. The treatment: stabilize the mother and deliver the baby as soon as possible.

As she lay on a gurney headed for an emergency C-section, her doctor asked whose life should be saved first—her life or her baby's. The gravity of the situation hadn't hit her until that moment. She went into the operating room not knowing if she, or her baby, was going to make it out alive.

Three days later, she got to see her son for the first time. He was two pounds at birth and had to spend the first few months of his life in the neonatal intensive care unit. Orlopp and her husband drove an hour to and from the hospital each day to see him during those first few months. But, Orlopp and her son, now a 25-year-old, had both survived.

In the midst of her personal adversity, Orlopp got a call from Kozlowski with the news that she was being promoted to vice president of human resources for Footlocker. She was the first employee in the history of the company to be promoted while on maternity leave.

She didn't know when her son was coming home from the hospital or when she would return to work, but she felt a big responsibility to be "the first" and to open that path for others to follow.

Throughout her career, Orlopp has been blazing the trail for other women in leadership and for the development and success of her employees.

"I always think back to that one call and how I want to be that person for others—that one call, one voice or one advocate for anyone who is talking to me about their career," she said.