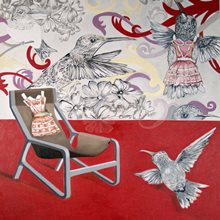 Like the saying goes, life rarely goes as planned. Such is the case for Jeanette Chinelli, a fourth year art major.

A love for art developed early for Chinelli.

"I think I was five years old. I remember seeing the ads in the newspaper in San Francisco for beautiful gowns that had been hand drawn. I had crayons and went about trying to design my own gowns," she said. During high school, she began entering various local contests and got recognition and encouragement from those around her.

Chinelli began her college journey at California State University Chico in 1999 where she started a BFA program. Before finishing her degree, she left to pursue art as a career in Bakersfield, Calif.

"I worked for an Interior Designer and did all of her custom hand painted work on walls, floors, and furniture. I also took on a couple projects at the local hospital for the pediatric unit and the NICU (Neonatal Critical Care Unit), and created murals," Chinelli said.

After 12 years, she moved to Houston, Texas where she created art for warehouse space and also where she built a private studio in 2008. She was an active artist participating in various solo and group gallery exhibitions.

In 2014, Chinelli experienced a scare with triple negative breast cancer while she was in the process of moving to Denver. After completing rounds of chemo and after undergoing breast surgery, Chinelli decided she needed something positive to focus on. So she enrolled in DU's Bachelor of Fine Arts program to finish the degree she had started over a decade ago.

"Once I made the decision to go back to school to obtain an art degree it gave me a totally new perspective on being in the art world in a different capacity. I was exposed to summer arts programs where I met well-known artists such as Judy Pfaff, Thomas Nozkowski, Polly Afpelbaum and art critic Peter Frank," said Chinelli.

Although most of her work has been exhibited in Houston, Chinelli recently had a solo art exhibition at the Core New Art Space in Denver. Her work mostly features mid-century chairs.

"Taking the chair and putting it in the metaphorical position of being a surrogate for the human form is the direction of my work. My fascination truly has to do with the era I grew up in," she said.

The future of art continues to inspire Chinelli.

"I am excited over the fact that fellow artists are also showing appreciation for the mid-century designs that I am inspired by," Chinelli said. "Artistic trends are like good music, they will get repeated by other artists because it is worth the effort."

Chinelli's next step is searching for gallery representation in Denver.

"Making the leap to ask galleries to look at your portfolio is always a challenge," she said. "It is a delicate balance that can be scary to approach. Rejection is never comfortable."