Seated once again in small tablet arm chair desks built for taking tests with pencil and lined blue books, the memories of college friends and of adventures both in and out of classrooms came flooding back. Those who returned to campus and to the Mass Communication building after a thirty- or forty- year hiatus had come to Homecoming 2021 to be reminded of the past and to share their stories of where life had taken them since their time at the University of Denver. The get-together had been spearheaded by former radio professional Chris Coffman (’71), who worked with Alumni Engagement director Erin Dietrich to plan the event. As chair, I invited DU Clarion editor Conor Chapman (’22) to join us and talk about the current DU student experience. 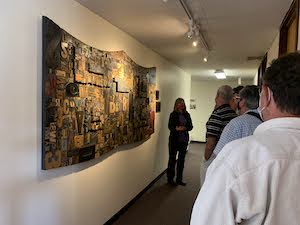 Among the group who attended were Trux Simmons (MA ’67), renowned senior producer/director of Rocky Mountain PBS; Steve Tingle (’85), who went to work in media sales and marketing research and then had a long career in finance and technology; Fran Scannell (MA ’70), who came to DU to study and, as he explained, “got a PhD in skiing” before spending 20+ years as a creative director who opened his own agency and created more than 600 advertisements for radio and television; Brian Kitts (’85), a former Clarion editor who’d worked for Disney and 20th Century Fox in Los Angeles before happily returning to Denver where he now serves as chief marketing and development officer for Red Rocks Amphitheater and teaches in DU’s marketing department; and Chris Gaudet (’85), who spent 16+ years with Gannett News editing, reporting, and compiling news on the global defense industry.

It was the first time that any of them could remember being invited back to be together in that one-story green stone building at the corner of South Gaylord and Harvard. Although several had given guest lectures or had met with younger students in internship settings, this time they had come to meet fellow alumni and, perhaps, to encounter their own reminders of the past. They shared with one another tentatively at first, but then, several common themes emerged: memories of former professor Harold Mendelsohn, the deeply respected scholar who wrote about politics and media and who had published his study of the Denver Police Department’s culture in the 1960s; and memories of trips taken to early television studios with renowned broadcast professor Neil Jordan, who was honored by the National Academy of Television Arts and Sciences for his groundbreaking work with NBC and in the Denver broadcast community. Stories of the Clarion and the DU radio station, and of classes and experiences that helped them learn how to raise money to fund media enterprises, that helped them learn how to write and rewrite, and that provided guidance for them as they learned how to solve the problems of technology and of human beings. After a brief time in university classrooms and studios that were at once familiar and unfamiliar, they all headed off, most to cheer on the DU hockey team as they swept Arizona State University in an 8-3 victory.

As planning is now under way for the winter quarter’s Media Ethics Speaker Series, these and other alumni and friends of the university are invited to come back to campus, either in person or via Zoom, to speak with current students who are about to graduate and begin their own career journeys.  If you’re a graduate who is willing to participate in this or other activities, please be in touch. We’d love to hear from you! 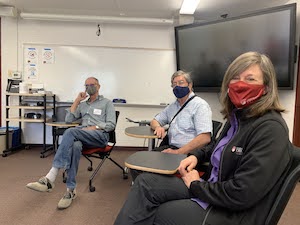 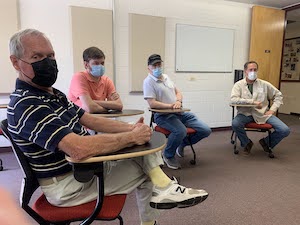