On Oct. 14, 2020, one of the largest, most destructive wildfires in Colorado’s history started burning in Grand County. Over the next several weeks, the blaze rapidly spread as firefighters from Colorado and out of state worked tirelessly to contain it. Suddenly, DU alumnus Ben Efram (BFA ’17), who normally works on immersive virtual reality experiences, found himself in the middle of the incident command center, using his technology business to help coordinate the response communication alongside firefighters. Efram, who studied in the College of Arts, Humanities and Social Science’s Emergent Digital Practices (EDP) program, shared his experience with the DU Newsroom. 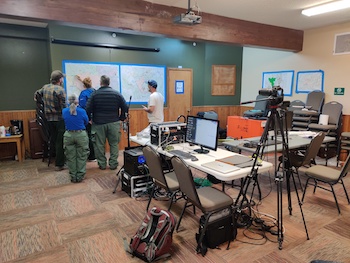 What were you working on before the wildfires?

Before the East Troublesome Fire and before the pandemic, I was working on large-scale, immersive virtual reality systems. After graduating college, I volunteered at Gates Planetarium at the Denver Museum of Nature & Science and got my feet wet on what it takes to make these large-scale systems work. So, I started my business building media systems. What I learned at DU was that the software we used is so versatile that it can pretty much be used for anything. I went from building servers for entertainment and virtual reality systems and was able to pivot those technologies using slightly different software to help out with the fires.

How did the opportunity come up to pivot and focus on the fires?

One of my friends from high school is a firefighter up in Spokane, Washington, and he was rostered onto a national-level incident response team. So, he was flown down to Colorado to help out with the fire. He called me because he was brought in to help with the technology, but found out they didn’t have the hardware expertise or even the resources to be able to communicate with the general public and even internally [among] all the different departments that came in from out of state. My friend knew I was doing somewhat related stuff, so he called me up and asked me if I was available. I was happy to get the opportunity.

What was your role?

The incident command post was where I had all my media stuff set up, and we had this room we called the studio. My high school friend [and I] were the designated studio managers and in charge of the entire operation in there and livestreaming press briefings. Direct communication with the public was very welcome up in Granby. Just being able to have a live question-and-answer session! That wasn’t every time, but they were able to, and I think that was very appreciated. 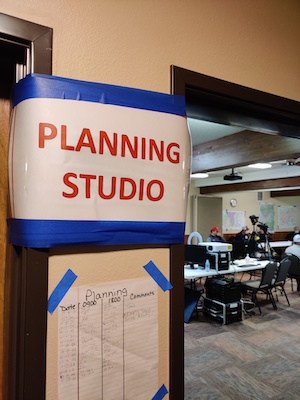 What part of the experience stands out the most?

It was really, really impressive to see how well-coordinated the national-level response team was. Getting to know the lingo and acronyms and see how they operate on these kinds of incidents was the most interesting thing to me. I’ve been so heavily focused on the technology side of things, it was a completely different experience to see what kind of effect that kind of technology could have. It was really cool to be a part of that process. Honestly, just a whole new level of fulfillment that I haven’t really had in my career so far.

How did your experience at DU prepare you for this career pivot?

With EDP, they really taught the versatility of the programs we used, and I’m still using very similar programs. So that helped a lot as far as being able to quickly develop something that could be used in that emergency situation. EDP prepared me on a purely technology level to work in this environment, but EDP also made me aspire to do more with that technology. EDP is not just a program that teaches you how to make art on a computer, moreso it is an opportunity to learn from some of the best and brightest art and digital technology philosophers in the world. Learning about contemporary technologies through an artistic lens creates an opportunity for depth and passion I believe would be difficult to find elsewhere. The versatility of the knowledge and skills gained through this program have been extremely useful in my life and career thus far.

Efram is now preparing for next wildfire season. To connect with Efram or see more of his work, visit his website at https://www.tltstudios.com.