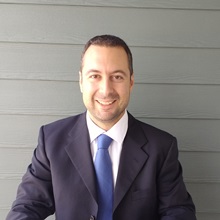 Angelo Castagnino is a scholar of 20th and 21st century Italian literature. His work focuses on characterization in the novel, with an emphasis on the Italian crime novel. It's a combination of literary, historical, and sociological reasons that draw him to this particular genre.

"Crime novels fictionalize one of the inner desires that are common to human beings—the search for truth and the fascination for what is secret and unknown, subjects that have interested prominent sociologists and philosophers," said the assistant professor of Italian.

"From a national perspective, many historical events in contemporary Italy have never been fully clarified, so that Italy can be interpreted as a country that needs to be 'investigated'."

Castagnino points to the work of Leonardo Sciascia, a widely-recognized public figure who first openly discussed the problem of organized crime at a time when Italy refused to deal with the subject, or even mention it.

"Just to exemplify the scope of his influence, after the publication of Sciascia's The Day of the Owl (1961) the Italian government went from denying the existence of organized crime to establishing a national commission that would tackle the problem," he said.

Castagnino's own work includes two monographs, The Intellectual as a Detective and Investigating Fascism, and a recently published book on the novels of famed Italian author Alessandro Perissinotto, «Fatevi portatori di storie». Alessandro Perissinotto fra giallo e romanzo sociale. The book addresses five fundamental aspects of Perissinotto's novels, including a chapter on crime and the techniques of the mystery novel.

Castagnino was a graduate student while Perissinotto was a professor at the Università di Torino in Italy, but the two never met. Although Castagnino was familiar with his work, it wasn't until 2013, when Perissinotto was nominated for the premier Italian literary award, the Strega prize, that he began studying his novels from a scholarly perspective.

"I find particularly fascinating his ability to combine the artistic value of a novel with topics that interest a broad audience," Castagnino said. "In an age of 'instant books' and publications that often dismiss any structural or technical reflection on the novel as a genre, I consider his work exceptional."

Castagnino's work also focuses on the narrative construction of the intellectual as a character and the socio-historical implications that such figure carries.

"The character of the intellectual is a highly symbolic one. It embodies the shared memory of a given country, while offering an allegory of the status and social perception of humanistic knowledge. I have found a pattern that portrays intellectuals as characters that, for one reason or another, end up vanishing, being defeated, ostracized, or even murdered. I argue that this is a narrative device that intellectuals have used to exemplify the condition of humanistic knowledge today," he said.

After receiving an MA in North American Studies from Università di Torino, Castagnino attended the University of North Carolina at Chapel Hill to earn a PhD in Romance Languages and Literatures. He taught at Tufts University and Bucknell University before joining the University of Denver in 2014. He teaches classes on the Italian detective novel, the contemporary short story, and the connection between history and literature in the 20th and 21st centuries. He especially enjoys the connection he makes between his scholarly specializations and the classes he offers in the Italian program and the Common Curriculum.

"It's amazing to see how much students can learn about Italy in only one quarter," he said, referring to the Common Curriculum. "I particularly enjoy final papers and projects, because they epitomize the work of months. I see those papers going through all the stages from proposal to finished project, and both my students and myself invest a remarkable amount of time in them."