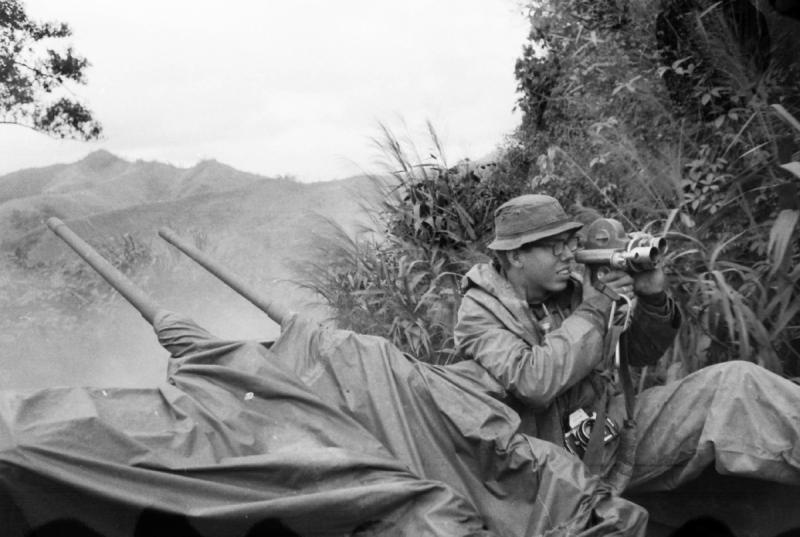 Photo of Tom Wolzien photographing the war in Vietnam circa 1971. Credit: Jim Saller.

During his junior year studying journalism and history at the University of Denver, Tom Wolzien (BA ’69) responded to a summer job posting on campus to be a news-film intern at Denver’s Channel 7. He had no idea of how profoundly this experience would change his life. There, he covered fires, floods and the local riots after the assassinations of Robert Kennedy and Martin Luther King, Jr. The experience launched Wolzien’s five-decade career in media, on Wall Street and as an inventor.

“At the end of the internship, someone left and I got a permanent job as a reporter-photographer,” Wolzien says. “Working the late shift and taking a full load of early classes my senior year was challenging. I only graduated because of a benevolent teacher who allowed me to finish an outstanding credit — in volleyball.  But that intern-to-full time work experience was fundamental both to my long-term career and in what was to come next for me in Vietnam.”

In July 1969, Wolzien enlisted in the army, became an officer and was deployed to Vietnam where he served as officer in charge of the army’s combat photography unit. His job was “to find the war and film it.” His footage shows up in documentaries and news retrospectives today, including in clips on YouTube.

After Vietnam, Wolzien spent two decades in TV news, mostly at NBC where he produced at the White House, ran the investigative unit of Nightly News, was a show producer and worked with new technologies as the industry transitioned from film to live video, satellites and computerization.

“It’s a long way from a 100-foot roll of 16mm film that held two minutes and 47 seconds of video to today’s chips that hold hours,” he says. “The mechanics of journalism have evolved from tons of equipment to recording and going live with your smartphone.”

Wolzien helped start CNBC and then moved to Wall Street where he spent more than a decade as the senior media analyst for Bernstein Research. There, he provided industrial and stock research to the large pension and mutual funds. He specialized in cable operations, many that were Denver-based, and entertainment companies like Disney and Time Warner. He was the first on Wall Street to identify the potential of cable modems and the use of broadband to stream entertainment content (like Netflix), bypassing traditional cable delivery. Wolzien recently donated thousands of pages of his research to the Cable Center library located on the DU campus.

His affinity for understanding the interrelationships of media technology and content resulted in multiple inventions and patents. His first patent covered click-to-buy or click-for-more-info buttons on many TV remote controls. Others deal with the use of smartphones for large-scale live broadcast production.

Wolzien left Wall Street for consulting, where he had a wide range of media and tech clients, including Microsoft, Warner Bros., the Director’s Guild and Discovery.

Today, he spends much of his time as executive chairman of The Video Call Center (VCC), co-owned with Valerie Wolzien, his spouse of 50 years whom he met at DU. VCC creates technology and software that enables smartphones to be the foundation of remote contributions to shows on broadcast, cable and the web. Wolzien sees this project as a way to further democratize media, breaking down tech barriers that traditionally keep different voices out of mainstream media.

“Tech has become the great democratizer, with all the good and bad that brings,” he says.

Even as Wolzien is fascinated and eager to see where new tech will bring news and entertainment, he’s cautious about focusing too much on the technical aspects.

“Across 50 years, I’ve had three careers — news, Wall Street and consulting/inventing. Technology changes over time, and you have to understand and harness those changes,” Wolzien says. “But fundamental throughout has been the essential skills in research and analysis, whether reporting news, studying companies on Wall Street or understanding opportunities when inventing new approaches to solving problems.”

For those seeking degrees and careers in media, film and journalism, Wolzien emphasizes the importance of developing both research- and mechanical-based skillsets but with a focus on research. He wants students to have more ways to approach issues with critical thinking, and he recognizes the growing need for quality control in an era when governance and responsibility, especially on social-media platforms, has dwindled.

“Learn how to do unbiased research and basic, fundamental reporting,” he says. “The technology will change throughout your career, but research and critical analysis are essential, regardless of the jobs you’ll have across your next 50 years.”