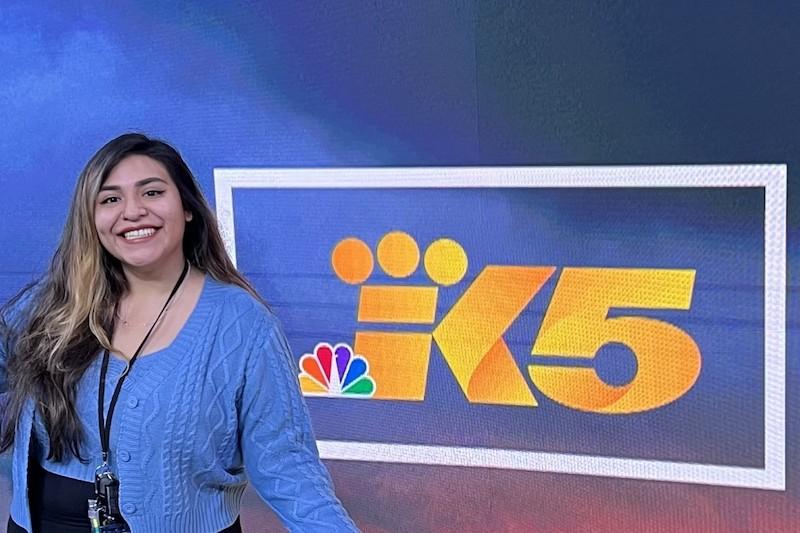 Networking and hard work paid off for two DU alumni who are now living out their dreams as TV news producers on different sides of the country. Chelsea Hernandez (BA ’19) and Grace Ganz (BA ’21) both jumped at producer-in-residence opportunities that placed each of them with one of the country’s most well renowned stations to launch their careers in broadcast journalism.

TEGNA is an American broadcast media company with 64 stations across the country and has provided a career home for several former University of Denver interns and alumni. TEGNA won 10 National Edward R. Murrow Awards for excellence in broadcast journalism this year, more than any other news organization.

In the past few years, TEGNA has been promoting a new program called “Producer in Residence” aimed at training and molding graduating seniors to become full-time producers for various TEGNA stations.

Producer in Residence is the largest producer development program in the industry, designed to train candidates to become accomplished broadcast and digital media producers. The program does not require formal experience because it includes a two-week producer boot camp and then a two-year, full-time producer position at one of its local stations.

University of Denver alumnus Chelsea Hernandez completed her two-year contract with TEGNA as a producer in residence and was promoted to full-time producer at KING 5 Seattle this past year.

Hernandez is a big proponent of reaching out to people on LinkedIn to help land jobs in the journalism field. She used this professional online service to learn about the TEGNA Producer in Residence Program and was ultimately offered the position. “My best piece of advice I can give to graduating seniors is to make and use connections,” Hernandez said.

Although this position is specifically focused on producing, there are still opportunities to learn about other careers, such as reporting, writing, editing and more. Hernandez explained that the key is to advocate for yourself by telling the station managers what you like and dislike.

“One of the people in my class was really set on reporting so he got a couple of opportunities to report for our San Diego station,” Hernandez said. “This led to him being promoted to our station in Minneapolis, because he was constantly pushing that he wanted to do some reporting.”

Along with Hernandez’s career accomplishments, she also mentored Grace Ganz, a fellow journalism student at DU, ultimately helping her to succeed in securing a spot in the training program.

Ganz (BA ’21) has been a part of TEGNA’s Producer in Residence program at WPMT in Harrisburg, Pennsylvania, since shortly after she graduated.

Initially she heard about this program in the weekly MFJS department’s newsletter, which introduced TEGNA and included both Chelsea Hernandez’s contact information and an invitation for interested students to reach out to her. After reading the description of the program she decided to give Hernandez a call.

“She was amazing,” Ganz recalled. “She told me about all the steps you have to go through in the hiring process for this program. The alumni connection was extremely vital in this case.”

Like Hernandez, Ganz reached out to many people on LinkedIn who work for TEGNA. She received responses about the application practice and what makes the best candidate.

“Everybody sounds like a broken record when they say networking is the greatest tool you have, but it is,” Ganz explained.

She advises others not to be afraid of rejection. If a journalist is genuinely interested in a position or in someone’s field of work, send them a message, she said. This could lead to advice, tips or a potential job interview.

Ganz elaborated, “Most people actually enjoy talking about their work to someone new to the industry looking for advice. The worst they can say is no… but rarely do they ever say that.”

She now works at a small news station which she says has unique benefits.

“We basically got there and after a few weeks were producing full time,” Ganz said.

The skills she quickly acquired while being “thrown in headfirst” probably would not have happened at larger stations, she noted. Those newsrooms have a large number of employees and reach a bigger audience, being located primarily in big cities. However, both big and small stations give the benefits of experience, Ganz stressed.

She now works half of the four o'clock and five o'clock shows and is working on a special project producing WPMT’s featured shows.

Both graduates stressed that alumni connections should not be taken for granted, especially in journalism. In such a small field it is necessary to reach out to fellow journalists who are willing to help others succeed.

If you are interested in the TEGNA Producer in Residence Program, please contact Noah Cooper at ncooper@tegna.com for more details.