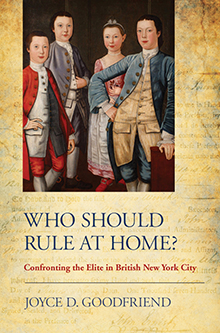 Joyce Goodfriend's recently published book Who Should Rule at Home? Confronting the Elite in British New York City was placed on Choice magazine's prestigious list of Outstanding Academic Titles in 2017.

Each year, Choice selects the most significant print and electronic works from its published reviews. Choice editors consider each title's presentation and scholarship, originality and uniqueness, and value and importance in the field, among other criteria. The 2017 list honors 504 of some 5,500 titles as distinguished scholarly work and offers both author and title greater recognition among the academic library community.

Goodfriend's book won Outstanding Academic Title in the Humanities, North America category. Who Should Rule at Home? examines the level of cultural authority held by New York City's urban elite between 1664 and 1776. Goodfriend argues that high-ranking gentlemen did not hold as much cultural power as previously thought. In the book, she highlights forms of everyday resistance that show how the socially anonymous confronted the privileged few.

In addition to this accolade from Choice, Goodfriend was awarded the 2016 Dixon Ryan Fox Manuscript Prize by the New York State Historical Association before the book was even published. The Dixon Ryan Fox Prize is presented each year to the best unpublished, book-length monograph dealing with some aspect of the history of New York State.

Read more about Who Should Rule at Home? from the Cornell Press, including the book summary, reviews, and detailed information.

Joyce Goodfriend is a professor of history at the University of Denver where her research focuses on early American history, American immigration, and American historical memory.