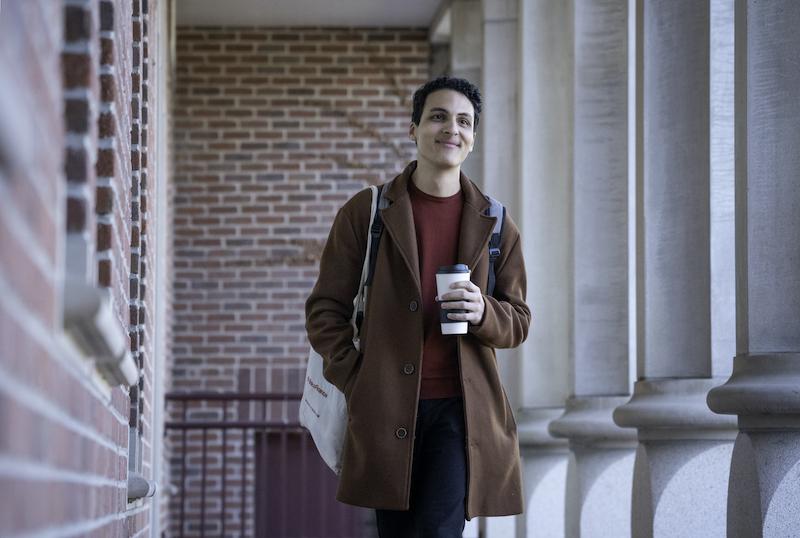 Walid Hedidar came to the University of Denver with a mission.

“When I left Tunisia to come and get my education at DU, what was on my mind was how I can grow my skills and perspective to contribute to the development of my country,” Hedidar says.

When he accepts his degree as a double major—anthropology and international studies—at undergraduate Commencement ceremonies this June, Hedidar can finally check that goal off his list.

But getting to that point was an adventure. He stepped foot on campus for the first time on move-in day his freshman year. He had just survived the exhausting 14-hour flight that brought him to the U.S. from his hometown in Tunisia. It was only his second time in the States.

“It was definitely a lot of changes,” Hedidar recalls. “Definitely parts were a challenge, but others were really fun to get to know the culture and the people here.”

With his country in mind, Hedidar spent much of his time at DU researching and comparing the education systems in the United States and Tunisia. He aimed to create an education model that pulls the strengths from each system, while minimizing the weaknesses. His research took him back to his hometown for a summer project and overseas for a full year of study abroad. Just as important, it ultimately led to him to colaunching a startup.

“My passion for education reform has helped me structure my four years at DU,” he explains.

Because it was important to apply the skills he learned at DU back in Tunisia, Hedidar began his first research project after freshman year in his hometown. He talked with teachers about their attitudes toward the education system, led and organized workshops for teachers and looked ahead at the next steps of action.

“A lot of the teachers were really happy to be involved in something that is related to the education system and see young people rallying behind education reform,” Hedidar says. “As a young person [who] comes from a country that recently became a democracy after the Arab Spring and is really on a path to develop and democratize, I really feel the work I’m doing is important.”

Hedidar’s passion for positive change has been fueled by witnessing his country’s transition from a dictatorship to a democracy. In ninth grade, he found himself spontaneously in the midst of a protest during the Arab Spring. That experience played a big role in setting him on his path today.

“I understood at a very young age the importance of freedom and democracy and not taking those for granted,” Hedidar explains. “It was really a revolution of young people and to see your friends, cousins, family members all rallying for the same thing is really powerful in sparking that mission and drive in me to contribute to the development of Tunisia.”

That drive to contribute compelled Hedidar to expand his learning even more and study abroad his entire junior year. He spent the first part of the year in Switzerland as a research assistant at the University of Geneva, where he took classes in education. For the second part of the year, he went to Paris to complete an internship at the Ministry of Education.

“I’m really thankful for my study abroad experience at DU,” Hedidar says. “Out of all of the experiences, it really helped shape me and helped me grow the most.”

Now his sights are set on bringing his education back home. This summer, his LEAPS Academy startup will conduct a teacher training academy in Tunisia. Along with the organization’s cofounder, Hedidar spent four years designing and refining the curriculum for the monthlong intensive program, drawing on his DU education to bring it to life. He credits the Chancellor’s Global Innovation Fellowship and Project X-ITE with helping him convert the concept into reality.

Once the summer is over, Hedidar hopes to get back in the classroom to start a master’s program and take his education to the next level.

“It feels like it’s come full circle in a sense,” Hedidar says. “Coming out of it now and seeing the growth that has happened and what I went through throughout the four years feels very rewarding.”